Lectures to My Students
By: Charles H. Spurgeon 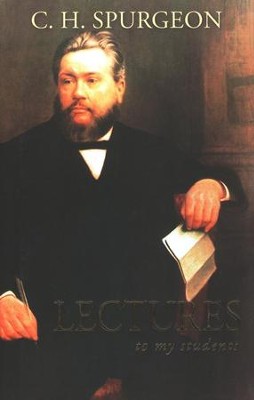 Lectures to My Students

▼▲
While C. H. Spurgeon is still remembered as being the most popular preacher of the Victorian era, it has generally been forgotten that the influence he exercised on fellow ministers and theological students was possibly an even greater factor in his life than his own personal ministry. That he organized a college, supervised the training of some 845 students, presided at an annual conference of ministers, and regarded all this as his 'life's labour and delight' are facts that are little known today.
Spurgeon's Lectures to my Students, contain the substance of Spurgeon's regular Friday afternoon addresses to the college students. This new complete and unabridged Banner edition, which has been newly typeset, contains all the lectures in the original first and second series, including The Minister's Self-Watch, The Preacher's Private Prayer, The Minister's Fainting Fits, The Holy Spirit in Connection with our Ministry, The Need of Decision for the Truth, and On Conversion as our Aim. Also included is a third series of lectures, originally published as The Art of Illustration, which focuses on the nature, use, and sources of illustrations and anecdotes in preaching.
To make this new edition as complete as possible, the publishers have also included Spurgeon's Commenting & Commentaries, which contains two further lectures and a fascinating and often humorously annotated catalogue of commentaries. This catalogue, compiled by Spurgeon after a review of some three to four thousand volumes, is anything but dull: calculated to produce enthusiasts for books, it also opens up a new world by its well-placed signposts to the riches of the past.

▼▲
'We were nearly there when some figures blocked our way. I went cold all over. This was no chance encounter. They had planned this and waited for us. This was it.''Move out of the way Blackie' the skinhead said. 'We got business with your friend.' Star Smith has enough problems in life trying to keep her wacky family a secret. Then a black girl arrives on the scene.... With the racist attitudes of kids in her area Star knows that if she befriends Ebony she could lose more than her reputation.

▼▲
I'm the author/artist and I want to review Lectures to My Students.
Back
×
Back
×