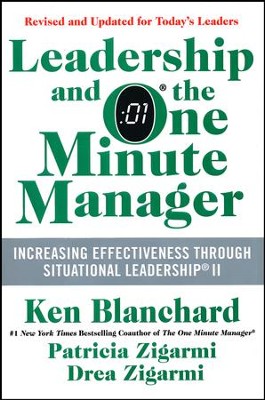 Leadership and the One Minute Manager: Increasing Effectiveness Through Situational Leadership (Updated)

▼▲
Newly revised and updated, Leadership and the One Minute Manager teaches leaders the world-renowned method of developing self-reliance in those they manage: Situational Leadership® II.

In Leadership and the One Minute Manager, you'll learn why adapting leadership styles to team members based on their key goals and tasks is so important and why knowing when to delegate, support, or direct is critical. By consistently using Situational Leadership® II's proven model and powerful techniques, leaders can develop and retain competent, motivated, confident employees. This remarkable, easy-to-follow book is a priceless guide to personalized leadership that elicits the best performance from your team—and the best bottom line for any business.

Ken Blanchard, PhD, is one of the most influential leadership experts in the world. He has co-authored 60 books, including Raving Fans and Gung Ho! (with Sheldon Bowles). His groundbreaking works have been translated into over 40 languages and their combined sales total more than 21 million copies. In 2005 he was inducted into Amazon's Hall of Fame as one of the top 25 bestselling authors of all time. The recipient of numerous leadership awards and honors, he is cofounder with his wife, Margie, of The Ken Blanchard Companies®, a leading international training and consulting firm.

Patricia Zigarmi is vice-president for business development at The Ken Blanchard Companies. With her leadership, ongoing initiatives for SLII® training have been implemented with several major corporations, including American Express, Apple, Microsoft, SAP, TJX, and Wells Fargo.

Drea Zigarmi is the president of Zigarmi Associates, Inc., and the director of research and development for The Ken Blanchard Companies. He has co-developed several Blanchard training and development products, including its "Leader Behavior Analysis" instruments.

▼▲
I'm the author/artist and I want to review Leadership and the One Minute Manager: Increasing Effectiveness Through Situational Leadership (Updated).
Back
Back