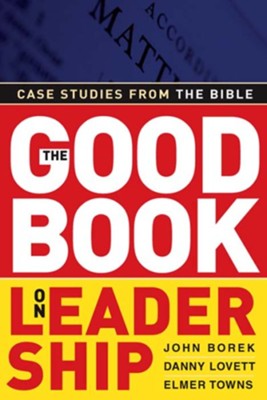 The Good Book on Leadership: Case Studies from the Bible - eBook

▼▲
The Good Book on Leadership examines biblical leaders on a case-by-case basis to unveil the many and varied biblical models for leadership. These models apply not just to pastors but also to business, sports, government, and even the military. God's Word provides us with what we need to know to provide godly leadership and guidance in any situation.

The Bible is full of leaders, and whether good or bad, each of their stories provide valuable insight into what is needed to be a strong leader.

The Good Book on Leadership examines each of these leaders individually in order to give readers a biblical model for leadership. This model is not just for pastors or those in leadership roles within the church, but also for anyone who finds themself in any poisiton of authority.

is President Emeritus of Liberty University. He holds a Ph.D. in business administration.He resides in Lynchburg, Virginia.

has led Liberty Baptist Theological Seminary since 1996. His previous books include Rod of the Spirit: A Journey into the Spirit-Filled Life and Jesus Is Awesome: Christian Life and Evangelism. He resides in Lynchburg, Virginia.

▼▲
Consider The Good Book on Leadership by John Borek, Danny Lovett, and Elmer Towns, a compendium of both secular and scriptural insights on all varieties of leadership styles. For a fact, there actually isnt a lot of original thinking presented here; however, the accumulated data and the excellent organization of other great thinkers wisdom makes this a volume of solid information. I found myself underlining quotes from numerous leaders, such as Eisenhower, Martin Luther King, Jr., Teddy Roosevelt, John F. Kennedy, Napoleon, Mark Twain, Louis Pasteur and dozens of others.
The book is based on teachings on leadership that the three authors have done in their classrooms at Liberty University. They claim that there are 23 specific kinds of leaders, and that each has marvelous talents and skills as well as serious potential weaknesses. If the reader of this book can adopt the positive aspects of these various leaders and avoid the potential pitfalls of their negative traits, then the reader can be a better leader at home, at church, on the job, and in society.
Chapters 2 through 24 focus on various leadership styles, such as The Strategic Leader, The Charismatic Leader, The Mentoring Leader, and The Visionary Leader. The authors profile someone from secular history who exemplifies this style, as well as someone from the Old or New Testament. Using the lives of these people, the authors then point out why and how these people succeeded at what they accomplished in life, and the authors offer supportive quotations from other sources to underscore the validity of their analyses. They also provide lists or outlines of how the reader can then follow the same methods in order to experience similar success.
Interestingly, this book also chooses to focus on people who were placed in important leadership positions but who failed miserably at what they were called upon to accomplish. For example, Samson is profiled in a chapter called The Flawed Leader, and King Saul is studied in a chapter called The Failed Leader. The point here is, just because you rise to a position of power--i.e., Jim Bakker, Bill Clinton, Jimmy Swaggart--it does not mean you will serve with high moral character, with courage, or with honor.
Im convinced I will be pulling this book off my shelf and glancing over it several times during the next year, just as a refresher on how both to lead and serve well. -- Dr. Dennis E. Hensley, Christian Book Previews.com

▼▲
I'm the author/artist and I want to review The Good Book on Leadership: Case Studies from the Bible - eBook.
Back
Back