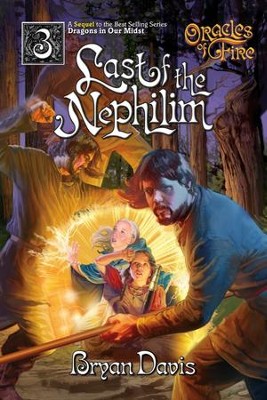 Last of the Nephilim #3

▼▲
The Nephilim, a race of giants from ancient times, find a way to invade Second Eden, a peaceful civilization in an alternate dimension. A small girl on that world holds one key to a secret that will separate earth and Hades from their disastrous union, and another girl from a land underneath Hades holds the other key.

Together, and with the help of two teenagers, they will battle the Nephilim and another great evil that plagues the land. With giants battling dragons, and a rogue dragon taking the side of the forces of evil, a cataclysmic battle erupts, endangering every life in both worlds.

With the two sides in bitter conflict, another of the Nephilim, the most powerful of all, rises from the dead to join the battle. But whose side will he be on? The two Oracles of Fire, Sapphira and Acacia, have to find a way to protect the two key-wielding girls from the brutal giants who are determined to kill them at all costs. When all hope seems lost, another warrior steps into the battle, the heir of Arthur and hero of the Dragons in our Midst series, Billy Bannister. Recommended for ages 12 and up.

▼▲
A single lie is spoken, allowing the Nephilim, a race of giants from ancient times, to invade Second Eden, a peaceful civilization in an alternate dimension. While Earth and Hades are locked in a catastrophic merging of their two realms, the prophet Enoch works to gather an army of humans and dragons from each world to go to war against the Nephilim. Included in that force are a small girl with prophetic power who originated in the depths of Hades; Billy Bannister, the heir of Arthur and hero of the Dragons in our Midst series; and Bonnie Silver, his fellow warrior.

▼▲
I'm the author/artist and I want to review Last of the Nephilim #3.
Back
Back