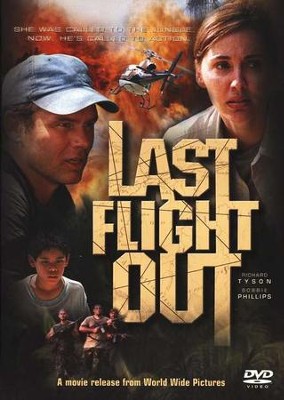 ▼▲
Rescuing the woman he loves will be Dan Hogan's biggest adventure yet. Last Flight Out is a daring international rescue that could have been torn straight from today's headlines. Dan (Richard Tyson, Blackhawk Down), a repo pilot, is hired to rescue his lost love, medical missionary Dr. Ann Williams (Bobbie Phillips, Chameleon). Sporadic reports to Ann's family reveal that ruthless drug runner General Salazar (Rene Moreno, Band of Brothers) has terrorized her Colombian village seeking slave labor. It's time to get her out. Despite the imminent danger, Ann refuses to leave without the oppressed villagers that she's come to love. With a rescue plane large enough for only 10 and General Salazar breathing down his neck, Dan appears to have met his match. Strap in for heart-pounding action as you take the Last Flight Out. Color. Not Rated. Approx. 83 minutes.

▼▲
Airplane repo-man and washed-up pilot Dan Hogan must head deep into the jungles of Latin America on a sketchy mission to rescue the woman and medical missionary he once loved while trying to get his airplane back from a gang of drug runners. This action-packed film shows the virtues of hard work, forgiveness and sacrificial love.

▼▲
I'm the author/artist and I want to review Last Flight Out, DVD.
Back
×
Back
×