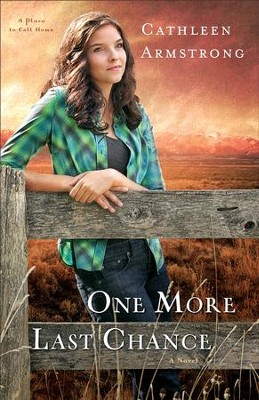 ▼▲
Sarah Cooley has come home to Last Chance, New Mexico, for one reason--because it doesn't change. After an engagement gone bad with a man who wanted to change everything about her, Sarah is more than ready for the town whose motto may as well be, "If it ain't broke, don't fix it."

Chris Reed, on the other hand, wants nothing more than to spark some change in the little town. As the new owner of the Dip 'n' Dine, he's shaking things up to draw folks from all over the Southwest into his restaurant.

As it turns out, the winds of change are blowing into Last Chance--just not in the ways that Sarah or Chris might expect.

With the same evocative writing and fascinating characters that won fans for her debut novel, Cathleen Armstrong invites readers back to Last Chance for a soul-searching, romantic story of two people navigating the twists and turns of small-town life.

▼▲
Cathleen Armstrong lives in the San Francisco Bay Area with her husband, Ed, and their corgi. Though she has been in California for many years now, her roots remain deep in New Mexico where she grew up and where much of her family still lives. After she and Ed raised three children, she returned to college and earned a BA in English. Her debut novel Welcome to Last Chance won the 2009 American Christian Fiction Writers Genesis Award for Women's Fiction. Learn more at www.cathleenarmstrong.com.

▼▲
I'm the author/artist and I want to review One More Last Chance,A Place to Call Home Series #2 -eBook.
Back
Back