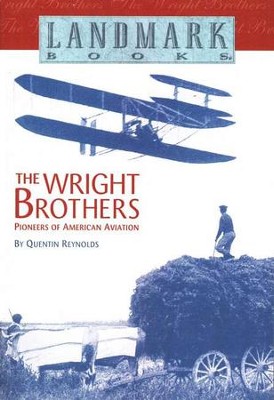 ▼▲
Young Orville Wright and his brother, Wilbur, had big dreams, and determination. They never gave up on a problem until it was solved. Together they designed a sled that went faster, a kite that flew higher, and even a newspaper-folding machine! But their biggest dream was to find a way for man to fly. Even when others scoffed at the idea of a flying machine, the Wright brothers refused to give up, until they made history at Kitty Hawk with the world's first successful airplane flight. Recommended for ages 9 and up.

▼▲
Young Orville and Wilbur Wright loved building things. From the fastest sled in town to the highest-flying kite, the Wright brothers’ creations were always a step ahead of everyone else’s. They grew up learning all about mechanics from fixing bicycles and studied math and physics. On December 17, 1903, Orville took off in the world’s first flying machine! The Wright airplane is one of the most amazing–and life-changing–

▼▲
I'm the author/artist and I want to review Landmark Books: The Wright Brothers.
Back
×
Back
×