A Lady of High Regard, Ladies of Liberty Series #1
By: Tracie Peterson 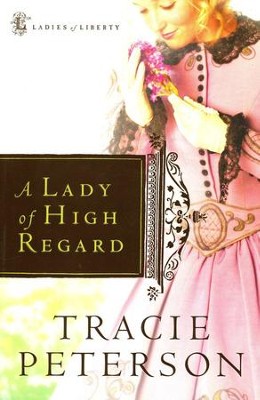 A Lady of High Regard, Ladies of Liberty Series #1

▼▲
Much to the horror of her aristocratic family, 19th-century socialite Mia Stanley is employed by Godey's Lady's Book magazine. Researching the miserable lives of seamen's wives in Philadelphia, she uncovers a scheme that puts her own life in danger. Will it also drive away the one man her heart desires? 384 pages, softcover from Bethany.

▼▲
Born into affluence, Mia Stanley is a winsome socialite with a knack for matchmaking. She's also a writer for Godey's Lady's Book magazine, much to the disdain of her family--and their society friends. A proper young lady of her social standing isn't meant to labor in such a way, but Mia has always had a way with words...

When her writing draws her into the world of downtrodden seamen's wives on Philadelphia's docks, Mia uncovers a scheme that puts her in harm's way. But her heart ends up on the line as well...Has her determination to always make a match driven away the one man whose esteem she covets?

▼▲
Tracie Peterson is the bestselling, award-winning author of more than 70 historical and contemporary novels including the HEIRS OF MONTANA, ALASKAN QUEST and LIGHTS OF LOWELL series. Her books make regular appearances on CBA bestseller lists. Tracie also teaches writing workshops at a variety of conferences on subjects such as inspirational romance and historical research. She has also written the nonfiction book I Can't Do It All: Breaking Free from the Lies That Control Us (with Allison Bottke & Dianne O'Brian). She and her family live in Belgrade, Montana.

▼▲
Tracie Peterson is the bestselling, award-winning author of more than 70 historical and contemporary novels including the HEIRS OF MONTANA, ALASKAN QUEST and LIGHTS OF LOWELL series. Her books make regular appearances on CBA bestseller lists. Tracie also teaches writing workshops at a variety of conferences on subjects such as inspirational romance and historical research. She has also written the nonfiction book I Cant Do It All: Breaking Free from the Lies That Control Us (with Allison Bottke & Dianne OBrian). She and her family live in Belgrade, Montana.

▼▲
In Tracie Petersons latest novel, A Lady of High Regard, Mia Stanleys life revolves around three things: social gatherings, making good matches for her friends, and writing for Godeys Ladys Book. Attending every party is the only expectation for a young lady of Mias standing. Her matchmaking is tolerated with good humor, as it usually ends with happy marriages. Her writing is another matter. Mias family is uncomfortable with the fact that she writes; her social circle, while seeming supportive, frowns upon it. But in her writing, Mia has found her true passion: speaking out for the abused wives of sailors. She loves helping them, taking on the tenement owners and fighting their cruelty and abuses. But thats an activity not at all appropriate for a lady of high regard.

Complicating all this is Garrett Wilson. His family has partnered with the Stanleys for many years in the shipping business, and Garrett has known Mia from when she was a child. Ever since then, she has been trying to marry him off to some friend of hers; he has, in turn, cared for like a little sister. Fiercely protective of Mia, Garrett cant bring himself just to let her do as she would like among the sailors wivesespecially when the situation spirals out of control and Mia starts putting herself in physical danger. As Garretts feelings toward Mia start to change, Mia throws herself more passionately into the battle for the rights of the sailors wives, even though it may cost her everything.

A Lady of High Regard, unfortunately, did not manage to earn very much of my regard. Aside from feeling like a Christianized re-write of Jane Austens Emma, several other things about the book fell rather flat, starting with the characters. Mia and Garrett seem little more than cardboard cutouts. Both are attractive, young, well-bred, and perfectly mannered. Mia is the traditional sprightly heroine, and Garrett plays a proper gentleman to balance her. The addition of an unusual hobby for Miaher writing and her involvement with the sailors wiveshelps make her a bit more real, but its sadly not enough. Also tripping the story up are Mias modern attitudes and actions, as she fails to act like a lady of her time; thankfully, these do form a plot point and are, thus, not wholly out of place.

Nothing is remarkable about Petersons writing style, either. The dialogue is slightly formal, though appropriate to the era. The ending feels contrived, rather a deus ex machina. The romance develops quite slowly; it takes Garrett half the book even to realize that he might like Mia, and it takes her even longer to reciprocate. However, this isnt a real problem if the book is first in a series, as the cover seems to hint.

Petersons great strength is her ability to research an era and incorporate that research into a story. That, she does flawlessly. The quality of research and depth of knowledge shines as she draws the reader into pre-Civil War Philadelphia. However, her timeframe is a bit shaky, as it required me actually to work out the math to figure when the book is set. Christianity is prominent through A Lady of High Regard which is another advantage of the book. While the characters may be rather flat, they are not sanitized Christians. Both Mia and Garrett are shown making hard choices and turning to God for guidance, especially as Garretts family faces its own crisis.

Overall, A Lady of High Regard is a decent book. It suffers from flat characters and a tired story, but it does entertain, paint an era, and provide a strong Christian message. I would moderately recommend it to women, especially those who already like Tracie Petersons work or those looking for an acceptable historical romance.  Rachel Niehaus, Christian

▼▲
I'm the author/artist and I want to review A Lady of High Regard, Ladies of Liberty Series #1.
Back
×
Back
×