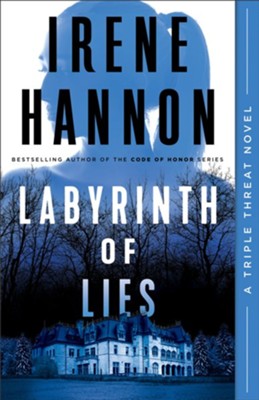 ▼▲
When the daughter of a high-profile businessman disappears from an exclusive girls' boarding school, police detective Cate Reilly is tapped for an undercover assignment. It doesn't take her long to realize that beneath the veneer of polish and wealth, things are not as they seem at Ivy Hill Academy. But the biggest surprise of all? The only man she ever loved is also working at the school.

Zeke Sloan has never forgotten Cate, but now isn't the best time for their paths to cross again. When their two seemingly disparate agendas begin to intertwine--and startling connections emerge among the players--the danger escalates significantly. But who is the mastermind behind the elaborate ruse? And how far will they go to protect their house of cards?

Queen of romantic suspense Irene Hannon invites you to scale the heights of human folly and plumb the depths of the human heart in this second gripping book in the Triple Threat series.

▼▲
Irene Hannon is the bestselling author of more than sixty novels, including the long-running Hope Harbor series, as well as Point of Danger and the Code of Honor, Private Justice, and Men of Valor suspense series, among others. Her books have been honored with three coveted RITA Awards from Romance Writers of America, and she is a member of that organization's elite Hall of Fame. Her many other awards include National Readers' Choice, Daphne du Maurier, Retailers' Choice, Booksellers' Best, Carol, and Reviewers' Choice from RT Book Reviews magazine, which also honored her with a Career Achievement Award for her entire body of work. In addition, she is a two-time Christy Award finalist. Learn more at www.irenehannon.com.

▼▲
I'm the author/artist and I want to review Labyrinth of Lies, softcover #2.
Back
Back