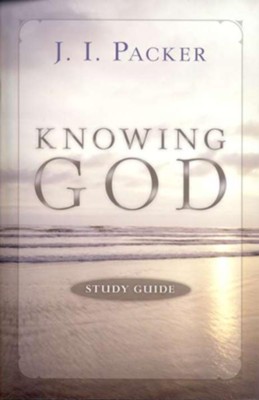 ▼▲
Over the past twenty years J.I. Packer's classic has revealed to over a million Christians the world over the wonder, the glory, and the joy of KNOWING GOD. This study guide helps groups of Christians to understand and apply the essential truths of KNOWING GOD. It contains twenty-two studies, one for each chapter of the book, allowing small groups to break it conveniently into eleven-week sessions.

▼▲
Over a million people have found J. I. Packer's classic Knowing God to be an immense help. And tens of thousands have used this study guide to know God even better. This guide takes readers through the essential truths of Packer's book. Individuals can stretch their understanding and allow the material to change their lives. Small groups can see God more clearly through rich and transforming discussions. In this guide are twenty-two studies, one for each chapter of the book. Start your adventure today!

▼▲
J. I. Packer is regarded as one of the most influential evangelicals in North America. He is Board of Governors' Professor of Theology at Regent College in Vancouver, British Columbia, and his writings include books such as , , (Crossway) and . He has preached and lectured widely in Great Britain and North America and served as general editor of the English Standard Version of the Bible published in 2001, and theological editor of the Study Bible version. In 2014, Packer was named Author of the Year by the Association of Logos Bookstores. He is a frequent contributor to and an executive editor of and has written numerous articles published in journals such as and He received a BA, MA and PhD from Oxford University.

▼▲
I'm the author/artist and I want to review Knowing God, Study Guide.
Back
×
Back
×