BRING CHRISTMAS HOME SALE: Save up to 85% through 11/2 >
KJV Book of Psalms-Unabridged, Paper
By: King James Bible & Dover Thrift Editions 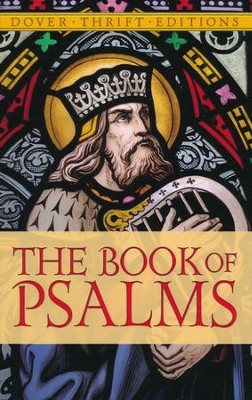 The Psalms have had an indelible impact upon English literature, as well as being one of the foundational texts of World literature and Western Civilization. This edition is perfect for literature studies and other classes where Psalms are emphasized, or need to be "marked up" for class. 144 pages, softcover.

Among the best known and most quoted books of the Old Testament, the Book of Psalms contains some 150 hymns of praise, prayers of crisis, and songs of faith once attributed solely to the Biblical King David. It is now believed that this collection of poems, originally chanted or sung with instrumental accompaniment, reflects Israel's entire history from the period of the exodus (13th century B.C.) to the postexilic restoration (after 600 B.C.), and we cherish them as the expressions of faith of many generations and many peoples. The Book of Psalms is shared by all sections of Judaism and Christianity, and is fundamental to both Christian and Jewish liturgies. Its English translation in the King James Version of the Bible (1611), from which this edition is reprinted complete and unabridged, is an exceptionally beautiful and stirring one, long regarded as a classic of English literature.

▼▲
I'm the author/artist and I want to review KJV Book of Psalms-Unabridged, Paper.
Back
×
Back
×