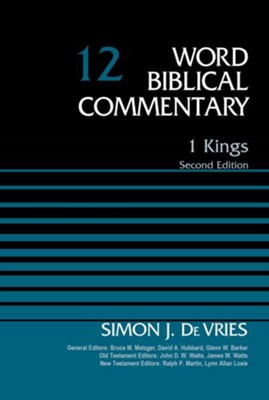 General Bibliography—occurring at the end of each volume, this extensive bibliography contains all sources used anywhere in the commentary.

Lynn Allan Losie is Associate Professor of New Testament at Azusa Pacific University. A generalist in New Testament studies, Dr. Losie teaches courses in the Gospels, the Acts of the Apostles, and the Pauline Epistles, as well as in the background areas of Greek, early Judaism, and the greater Hellenistic World. He has published articles on the New Testament and had served as the associate New Testament editor of the Word Biblical Commentary (1997 - 2013). Ordained as a Baptist minister, he has also served in pastoral ministry in Southern California and Oregon.

▼▲
I'm the author/artist and I want to review 1 Kings: Word Biblical Commentary, Volume 12 (Revised) [WBC].
Back