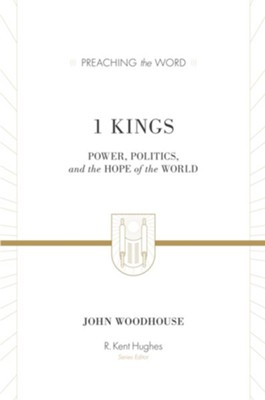 1 Kings: Power, Politics, and the Hope of the World (Preaching the Word)

Walking us through the rise and fall of fourteen Israelite kings, John Woodhouse helps us understand and teach the book of 1 Kings by showing us how the failure of human power points to God’s promise to establish a kingdom that will never pass away. This commentary helps modern readers, especially pastors and Bible teachers, understand and apply the message of 1 Kings to their own lives. Part of the Preaching the Word commentary series.

John Woodhouse (DPhil, Victoria University of Manchester) served as principal of Moore Theological College in Sydney, Australia, from 2002 to 2013. Previously, he worked in pastoral ministry in a suburb of Sydney. He has published articles in various academic journals and is the author of three volumes in Crossway’s Preaching the Word commentary series.

▼▲
I'm the author/artist and I want to review 1 Kings: Power, Politics, and the Hope of the World (Preaching the Word).
Back
Back