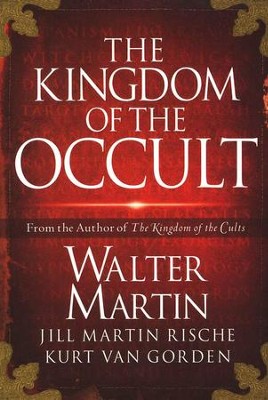 Kingdom of the Occult

This book takes Dr. Walter Martin's comprehensive knowledge and his dynamic teaching style and forges a strong weapon against the world of the Occult-a weapon of the same scope and power as his phenomenal thirty-five year bestseller, The Kingdom of the Cults (over 875,000 sold).

▼▲
Kurt Van Gordon, formerly a pastor in Utah, is the director of Jude 3 Missions and the Utah Gospel Mission, founded as a mission to cults in 1898.

▼▲
Jill Martin Rische is currently completing her Masters Degree in Humanities/History of Religion at California State University. She is Dr. Walter Martins eldest daughter and the author of several books. Jill and her husband, Kevin, are the Managing Editors on the 2003 edition of The Kingdom of the Cults (Bethany House) working with Dr. Ravi Zacharias as the General Editor. The Risches are also the founders of Walter Martin Ministries (www.waltermartin.com) and the producers of the nationwide radio show Essential Christianity, featuring Dr. Walter Martin as The Original Bible Answer Man.
Kurt Van Gorden has contributed chapters on cults, the occult, and world religions to several books, including Dr. Walter Martins Kingdom of the Cults (1985 edition) and Josh McDowell and Don Stewarts The Deceivers and The Occult. He wrote Mormonism for the Zondervan series on Cults and World Religions. Kurt Van Gorden is an ordained minister and directs two missions to the cults, Jude 3 Missions and the Utah Gospel Mission. The Utah Gospel Mission began in Salt Lake City, Utah, in 1898 and is the oldest existing mission to the cults.
The late Dr. Walter Martin authored 12 books and was a recognized as the "father" of the modern Christian Counter-cult Movement. A pioneer in the field of teaching by tape, Dr. Martin recorded more than 5,000 audio tapes on general biblical subjects. Dr. Martin pioneered the development of seminars dealing with cults and the problems of secularism in education. Dr. Martin was the founder and president of the Christian Research Institute and the host of the nationally syndicated radio talk show The Bible Answer Man.

▼▲
I'm the author/artist and I want to review Kingdom of the Occult.
Back
Back