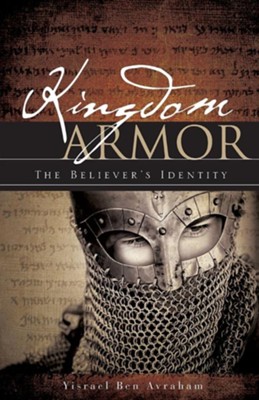 ▼▲
Kingdom Armor takes us back to the beginning and reminds us that God created us in His own image. The first attack against mankind was on identity. Since then the battle still wages on leaving people with some form of an identity crisis. As a community of believers, the answer as to "who we are" should be clear but in many instances is not. Kingdom Armor turns the mirror toward our souls to explore God's original design, plan, purpose and function for our lives. It unpacks what it really means to be made in the image and likeness of God. It helps us to rediscover our God-given identity, redefine our God-given purpose, and refocus on our God-given function. It helps us to understand and embrace our Divine Identity which God originally intended. Rabbi Yisrael shares a powerful testimony about his own identity struggle. This testimony lays a foundation that God is more than able to release anyone from the spiritual bondage of false identity. Sharing new and profound insights about the identity of Adam and Eve, this book will connect the Lord's armor and kingdom identity to a pure language of being born again. Readers will walk away knowing who they are and why things in this world need no longer define them. Rabbi Yisrael Ben Avraham is the founder of HaMishkan located in Austin, Texas and Jerusalem Israel. Passionate about his Jewish heritage he seeks to restore believers to their Hebraic roots. He believes study is the highest form of worship and teaches others how to live as a dwelling place of the Lord. Gifted as a strong apostolic teacher he oversees ministries in India, Africa and British Columbia while speaking extensively worldwide. He resides in the US and Israel with his wife Sarah and their son.

▼▲
I'm the author/artist and I want to review Kingdom Armor.
Back
×