Skip to main content
Kidnapped By a Cult: a Pastor's Stand Against a Murderous Sect
By: Shen Xiaoming, Eugene Bach
Stock No: WW9118048 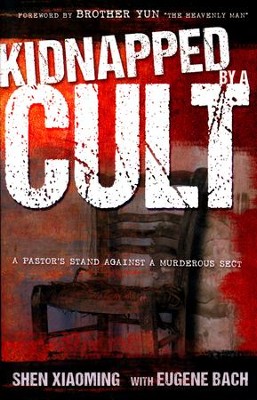 Kidnapped By a Cult: a Pastor's Stand Against a Murderous Sect

As a founder of the China Gospel Fellowship, one of the largest underground churches in China comprising millions of believers, Pastor Shen Xiaoming knew the meaning of persecution. Time and again, he experienced deprivation, disease, and imprisonment for the sake of the incredible spread of the gospel.

In April 2002, Pastor Shen was kidnapped by the murderous Eastern Lightning cult. This dangerous cult believes that Christ returned in the form of a female Chinese leader in 1992, and for two months Pastor Shen was subjected to the use of force, torture, and indoctrination in an effort to convert him.

As Eastern Lightning slowly gains worldwide attention for their violence, Pastor Shen's first-person account of his life and work in Tanghe County and his persevering stand against this murderous sect will both inspire and inform.

▼▲
"I would not encourage anyone to seek persecution, but as Christians, we should never deny ourselves the privilege of traveling on the path of suffering. It is a difficult path--but a glorious one." -Pastor Shen Xiaoming

Shen Xiaoming is the pastor of millions.

Founder of one of the largest underground churches in China, he is no stranger to persecution from China’s historically hostile government. Time and again, Pastor Shen has experienced deprivation, disease, and imprisonment for the sake of the incredible spread of the gospel in rural central China.

But April 16, 2002, brought the persecution to a new level. Pastor Shen was kidnapped by the murderous Eastern Lightning cult after being lured into a supposed Bible conference. This dangerous cult believes that Christ returned in the form of a female Chinese leader, and they use force, torture, and indoctrination to gain followers. Yet again, Pastor Shen had to take a stand against evil.

Here is his story.

Shen Xiaoming was converted in Henan Province in 1979 and eventually became a founder of the China Gospel Fellowship, by some estimates the largest church in the world, ministering and teaching throughout the underground house church for years. Today he still labors for the unity and freedom of the Chinese church.

Eugene Bach is a pseudonym for a member of the Chinese underground church. He was trained in US military special operations and served two tours in the Persian Gulf and Asia-Pacific region, serving primarily as a member of a rapid response team focusing on targeted threat elimination, counterterrorism, and security. He has been working with the underground church in China for more than fifteen years, helping them to establish forward mission bases in closed countries around the world, including Iraq and Syria. Eugene leads the Chinese mission movement called Back to Jerusalem, which provides essential support for Chinese missionaries in Africa, Asia, and the Middle East. He has also written or coauthored numerous books about the underground church in China, North Korea, and Iran, including ISIS: Heart of Terror, The Underground Church, and I Stand with Christ.

▼▲
I'm the author/artist and I want to review Kidnapped By a Cult: a Pastor's Stand Against a Murderous Sect.
Back
Back