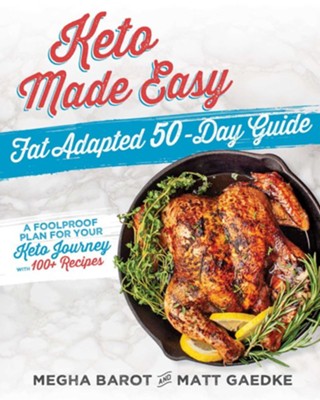 ▼▲
You already know you want to eat healthy and start burning fat. But making that happen on a daily basis can feel time-consuming and difficult—it’s hard to know where to start. Megha Barot and Matt Gaedke from KetoConnect are here to change that. Their guide to adopting a nutritious low-carb, fat-burning keto lifestyle is a complete step-by-step road map for fifty days of keto.


In this book, you will learn:


The meal plan takes the guesswork out of cooking—no more of that dreaded question, "What’s for dinner?"—and incorporates weekly meal prep so that you spend as little time as possible in the kitchen. And with recipes like Zucchini Basil Muffins, Mustard-Rubbed Pork Tenderloin, and Peanut Butter Cookies, you’ll look forward to mealtime!

Although Megha Barot just graduated from the University of San Francisco School of Law, based on her cooking you would think she’d graduated from culinary school. She loves to challenge herself daily and draws inspiration from family and friends. She has spent the past three years in San Francisco getting acquainted with West Coast people, but more importantly West Coast food. She is now happy to be back in Philadelphia, where she uses her SF influence daily while working on her website, KetoConnect.

Matt Gaedke has always had a passion for cooking and living a healthy lifestyle. He spends his days as a computer engineer and his nights engineering delicious low-carb meals. Originally from Dearborn, Michigan, he has spent the last four years in Columbus, Ohio, and San Francisco. He recently moved to Philadelphia, the birthplace of KetoConnect...and freedom. He’s a diehard fan of Michigan football, perfectly ripe avocados, and hip hop music.

▼▲
I'm the author/artist and I want to review Keto Made Easy 30 Day Guide.
Back
×