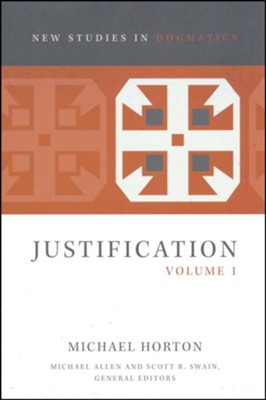 The doctrine of justification stands at the center of our reflection on the meaning of salvation, mission, and life together. In volume 1, Michael Horton explores justification from the patristic era to the Reformation under the broader rubric of the “great exchange.” In doing this he provides a map for contemporary discussions of justification, identifying and engaging his interlocutors from Origen to the magisterial Reformers. His first study concludes by examining the hermeneutical and theological significance of the Reformers’ understanding of the law and the gospel and the resultant covenantal scheme that became formative in Reformed theology, opening the door to the constructive task of volume 2—to investigate the biblical doctrine of justification in light of contemporary exegesis.

The doctrine of justification stands at the center of our systematic reflection on the meaning of salvation as well as our piety, mission, and life together. In his two-volume work on the doctrine of justification, Michael Horton seeks not simply to repeat noble doctrinal formulas and traditional proof texts, but to encounter the remarkable biblical justification texts in conversation with the provocative proposals that, despite a wide range of differences, have reignited the contemporary debates around justification.

Volume 1 engages in a descriptive task - an exercise in historical theology exploring the doctrine of justification from the patristic era to the Reformation. Broadening the scope, Horton explores patristic discussions of justification under the rubric of the "great exchange." He provides a map for contemporary discussions of justification, identifying and engaging his principal interlocutors: Origen, Chrysostom, Augustine, Thomas Aquinas, John Duns Scotus, William of Ockham, Gabriel Biel, and the magisterial reformers. Observing the assimilation of justification to the doctrine of penance in medieval theology, especially via Peter Lombard, the work studies the transformations of the doctrine through Aquinas, Scotus and the nominalists leading up to the era of the Reformation and the Council of Trent. He concludes his first study by examining the hermeneutical and theological significance of the Reformers’ understanding of the law and the gospel and the resultant covenantal scheme that became formative in Reformed theology. This then opens the door to the constructive task of volume 2 - to investigate the biblical doctrine of justification in light of contemporary exegesis.

"This thorough, systematic, and far-ranging work advances a reading both distinctive and yet more traditional than many of today’s dominant paradigms."—CRAIG KEENER, Asbury Theological Seminary

"This is a volume bristling with theological insight and intellectual energy."—SIMON GATHERCOLE, University of Cambridge

"Very impressive and a major contribution to the clarification of the significant issues."—ROBERT KOLB, Concordia Seminary, Saint Louis

"A superb and engaging book, marked by a careful and generous listening to other theological traditions. It will not only reenergize the reader with a passion for understanding this long-running doctrinal conversation, but also challenge one to engage critically."—EDUARDO J. ECHEVERRIA, Sacred Heart Major Seminary

Michael Horton (PhD) is Professor of Systematic Theology and Apologetics at Westminster Seminary in California. Author of many books, including The Christian Faith: A Systematic Theology for Pilgrims on the Way, he also hosts the White Horse Inn radio program. He lives with his wife, Lisa, and four children in Escondido, California.

Scott Swain is Professor of Systematic Theology at Reformed Theological Seminary in Orlando, Florida. He is author of several books, including The God of the Gospel: The Trinitarian Theology of Robert Jenson, and Trinity, Revelation, and Reading: A Theological Introduction to the Bible and its Interpretation. He serves as general editor (with Michael Allen) for T&T Clark’s International Theological Commentary and Zondervan’s New Studies in Dogmatics series. He is a regular blogger at Reformation21.

▼▲
'Respectfully yet relentlessly pressing Horton's many conversation partners in New Testament, this thorough, systematic, and far-ranging work advances a reading both distinctive and yet more traditional than many of today's dominant paradigms. Horton also exposes some of our blind spots, properly challenging mischaracterizations of the Reformers. In contrast to some New Testament scholars driven too much by modern philosophic premises, Horton is often more faithful to ancient interpretations relevant to the biblical cultures. As a New Testament scholar, I profited repeatedly from his historical context for various theological approaches in modern New Testament scholarship.'
'This is a superb theological study that creatively retrieves the doctrine of justification from the patristic era to the Reformation. Horton seeks to revitalize the contemporary ecumenical discussion regarding justification by showing not only the enduring merits of the Reformation's exegetical, theological, and pastoral legacy, but also its hermeneutical and theological superiority to alternative views, namely, Roman Catholic, Radical Orthodoxy, the new perspective on Paul, and new Finnish interpretations. Some of his interpretations are questionable, for example, 'the triumph of Nominalism occurred with the Counter-Reformation (Council of Trent) rather than with the Reformation.' Still, I came away from reading this engaging book marked by a careful and generous listening to others, both reenergized with a passion for understanding the long-running doctrinal conversation about God, grace, and justification and challenged to engage critically the author's vision.'
'This is a serious and important work coming from a leading Reformed theologian. It concerns a pivotal doctrine that was at the heart of the Reformation and that continues to provoke differences between Protestants and Catholics. Both Protestant and Catholic readers-not only scholars but also theologically interested laity-will profit by wrestling with this learned historical study.'
'It is not often one finds a book ranging across the three 'CDs'--the Damascus Document, Augustine's City of God, and Barth's Church Dogmatics! This is a volume bristling with theological insight and intellectual energy. Add to that Horton's learning and clarity, and you have that rare thin--a gripping and intelligent treatment of justification.'
'Doctrine, as the Reformers never tired of saying, flows from and leads back to Scripture. Michael Horton has demonstrated this thesis with Justification, a project that is at once a rich and rigorous exegetical investigation of the doctrine of justification and at the same time a model of theologically engaged scriptural interpretation. As all theology must, this book drinks from the well of Scripture as it walks the path of reading and doctrine towards the horizon of praise and proclamation. The result, both exegetically informed and theologically significant, is good news 'for your bones and mine' (Luther): God justifies the ungodly in Christ, an unconditioned gift given in the word of promise that creates faith.'
'This work is very impressive and a major contribution to the clarification of the significant issues. Horton anchors his presentation of the Protestant Reformers' teaching on the justification of the sinner in an extensive, carefully wrought exploration of the biblical roots, and he anchors conceptualizations of the relationship between sinners and their Creator within a covenantal framework that takes seriously both the sacramental nature of how God operates and the re-creative power of the gospel delivered by Christ. He challenges false interpretation of the Reformers' understanding of justification with thorough, perceptive assessments of patristic and medieval doctrines of justification, providing an alternative that capitalizes on the sixteenth-century insights to address the twenty-first- century person in the midst of the turmoil of our times.'

▼▲
I'm the author/artist and I want to review Justification, Volume 1.
Back
Back