Skip to main content
Justification by Grace Through Faith: Finding Freedom from Legalism, Lawlessness, Pride, and Despair
By: Brian Vickers
Stock No: WW380509 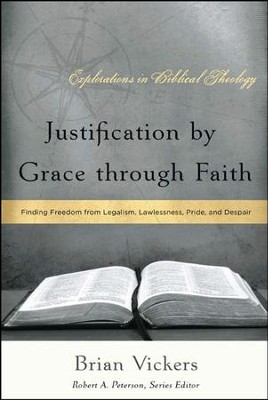 Justification by Grace Through Faith: Finding Freedom from Legalism, Lawlessness, Pride, and Despair

▼▲
The doctrine of justification as an alien, imputed righteousness has been under attack for several years. Justification by Grace through Faith traces how the doctrine unfolds in Scripture and how, in Christ, God provides everything needed for sinners to be made right with him. Whether we are struggling with legalism, lawlessness, pride, or despair, a biblical view of justification will lead us away from ourselves to the God who accepts us fully in Christ.

The Explorations in Biblical Theology series addresses the need for quality literature that attracts believing readers to good theology and builds them up in their faith. Each title in the series combines solid content with accessibility and readability-a valuable addition to the library of any college student, thoughtful lay reader, seminarian, or pastor.

▼▲
Justification is God’s declaration that sinners are made right with him through faith in Christ, whose life, death, and resurrection provide forgiveness and the righteousness God desires of his people. This doctrine of justification as an alien, imputed righteousness has been under attack for several years. Brian Vickers biblical theology of justification traces how the doctrine unfolds in Scripture, showing that in Christ, God provides everything needed for sinners to be made right with him. Whether struggling with legalism, lawlessness, pride, or despair, a biblical view of justification will lead us away from ourselves to the God who accepts us fully in Christ.

▼▲
Brian Vickers is both a brilliant scholar and a faithful teacher. In his new book he offers both theological edification and spiritual encouragement.
-R. Albert Mohler, Jr.

In creative ways Vickers juxtaposes Adam, Abraham, Israel, and the Mosaic Law respectively with their supreme and crowning counterpart--Jesus, the obedient second Adam, the fulfillment of teh promise to Abraham, and the Atonement as the goal of the Mosaic Law.
-Hans F. Bayer

Vickers has done the church a service, not by laboring through the recent challenges for a negative result, but by offering a positive, fresh exposition from the Scriptures. With breathtaking scope he traces Christ's imputed righteousness from the pages of Genesis all the way to Paul and James.
-A. Andrew Das

▼▲
"It is hard to exaggerate the importance of justification, for it is about being right with God. Brian Vickers's new work on the matter is to be warmly welcomed. Here we find a clear and accessible and most importantly a biblical restatement of what the scriptures teach about justification. It is obvious in reading this work that Vickers has immersed himself in biblical theology. At the same time he has the heart of a churchman, for the pastoral and practical application for contemporary readers shines in this book. This is the first book I would give to a scholar or layperson desiring to learn more about justification." -- Thomas R. Schreiner, James Buchanan Harrison Professor of New Testament Interpretation, The Southern Baptist Theological Seminary, Louisville, Kentucky

The Reformation’s doctrine of justification as an alien, imputed righteousness has been under attack for several years now. Professor Brian Vickers has done the church a service not by laboring through the recent challenges for a negative result, but by offering a positive, fresh exposition from the Scriptures. With breathtaking scope he traces Christ’s imputed righteousness from the pages of Genesis all the way to Paul and James. Along the way he calms the troubled soul since God’s declaration of righteousness does not depend on individual worthiness, whether before or after conversion, and yet the justified are never the same again. Their fruit vindicates the Lord at the judgment. -- A. Andrew Das, Donald W. and Betty J. Buik Chair and Professor of Religious Studies, Elmhurst College, Elmhurst, IL

Brian Vickers presents a thoughtful and accessible treatment of a core doctrine and central life-truth revealed throughout redemptive history: God, in his righteousness, justifies the fallen and undeserving sons and daughters of Adam and Eve amidst their persistent “sin problem,” including Paul at his conversion, by faith in Christ alone. In creative ways, Vickers juxtaposes Adam, Abraham, Israel and the Mosaic Law, respectively, with their supreme and crowning counterpart, Jesus, the obedient second Adam, the fulfillment of the promise to Abraham, and the atonement as the goal of the Mosaic Law. While Vickers displays thorough awareness of the New Perspective(s) on Paul, he focuses, with good exegetical support and an irenic tone, on affirmations of historic interpretations. For instance, he provides good reasons for upholding “imputed righteousness” as an aspect of justification and sees “works” in Paul’s terminology as referring to self-effort associated with moral guilt, with or without the Mosaic Law. Vickers readily concedes that salvation involves much more than justification by faith. Nevertheless, he rightly emphasizes that justification is crucial in God’s redemptive work. I can warmly recommend Vickers’ book to anyone seeking clear Biblical guidance on a central yet embattled truth and reality. -- Hans F. Bayer, Ph.D., Professor of New Testament, Covenant Theological Seminary

For nearly half a century now, the historic and biblical doctrine of justification has been hotly debated. Brian Vickers lays hold of the wealth of wisdom produced by this debate, seen in the light of his years of study and rich international teaching experience. The result is a well-organized and gripping synthesis of the many biblical passages that speak to the simple but infinitely profound question posed by the Philippian jailer: "What must I do to be saved?" Vickers shows that the answer lies first of all in what God in Christ has done. It is hard to imagine a more wide-ranging, sure-footed, and user-friendly study upholding the doctrine by which, indeed, the true church stands or falls. -- Robert W. Yarbrough, Professor of New Testament, Covenant Theological Seminary, St. Louis, Missouri

This book is a positive, clear, constructive treatment of the biblical doctrine of justification by faith. Vickers is never unaware of the present day narratives on this doctrine and allows them to inform his discussion where necessary, but he does not stray from his purpose of letting the progressive biblical narrative determine the elements of his treatment. His personal conversation with Protestant confessional developments is ever-present giving consistency and historic substance to his discussion, but does not override his relentless movement from the biblical text to doctrinal formation. The treatment is fulsome-Adam and Christ, Abraham and Christ, Moses and Christ, covenantal unity and personal responsibility, imputation and transformation, Paul and James, the Law, the cross, and the Spirit—andd results in a quality presentation of a central biblical teaching. It is accessible in its diction, illustrations, careful and clear development of paragraph-to-paragraph and chapter-to-chapter thought, but finally allows entrance to those that are convinced that learning about justification is an important, perhaps supremely vital, pursuit for all people. -- Thomas J. Nettles, Senior Professor of Historical Theology, The Southern Baptist Theological Seminary, Louisville, Kentucky

Brian Vickers is both a brilliant scholar and a faithful teacher. In his new book, Justification by Grace Through Faith, he offers both theological edification and spiritual encouragement. Those who love the Gospel will welcome this new book. -- R. Albert Mohler Jr., President, The Southern Baptist Theological Seminary, Louisville, Kentucky

In the important debate about justification that continues within much contemporary evangelical theology and church life, Brian Vickers provides sound biblical and theological instruction on the key issues involved. With questions for guiding study and further reflection included, it will serve a broad audience—pastors and other church leaders, college and seminary students as well as their teachers, and others with an interest in these issues. -- Richard B. Gaffin Jr., Professor of Biblical and Systematic Theology, Emeritus, Westminster Theological Seminary

“Brian Vickers’ Justification is a delightful read with its pastoral warmth and engaging style. Too easily and too often this crucial doctrine becomes merely an abstract, academic debate. Vickers, while aware of the debates, constantly roots the discussion in the impact and benefit this teaching should have for life according to the Scriptures. Vickers’ years of teaching this material in seminary and missions settings is apparent as he explains careful and well, writing in a way that flows easily. I warmy commend it to all.” -- Ray Van Neste, Union University

“Written discussions of justification are often topical or historical in bent, and understandably so. Brian Vickers has produced a concise and Reformed survey of justification that is exegetical and biblical-theological in focus. Taking us from Genesis to the New Testament—and never losing us along the way—he admirably shows the flowering and unfolding of the doctrine of justification in Scripture. Vickers’ scholarship makes this informed study an important contribution to the literature. Well-organized and accessibly-written chapters, study questions, and a pastor’s heart make it a delight to read. I heartily commend it.” -- Guy Prentiss Waters, Reformed Theological Seminary, Jackson, MS

▼▲
I'm the author/artist and I want to review Justification by Grace Through Faith: Finding Freedom from Legalism, Lawlessness, Pride, and Despair.
Back
Back