Just Beyond the Clouds, Cody Gunner Series
By: Karen Kingsbury 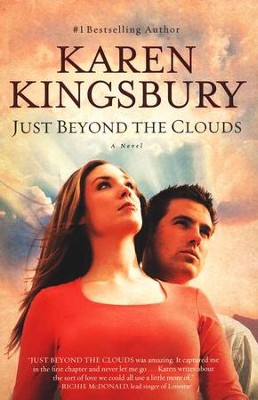 ▼▲
An unforgettable story of two brothers and the only woman whose love can set them both free.

Still aching over his wife's death, Cody Gunner can't bear the thought of also letting go of his Down Syndrome brother, Carl Joseph. Cody wants his brother home, where he will be safe and cared for, not out on his own in a world that Cody knows all too well can be heartless and insecure. So when Carl Joseph's teacher, Elle, begins championing his independence, she finds herself at odds with Cody. But even as these two battle it out, they can not deny the instinctive connection they share, and Cody faces a crisis of the heart.

▼▲
#1 bestselling author Karen Kingsbury tells the heartwrenching story of Cody Gunner, a widower fighting for stability, and the woman who wants to help him trust again--even when trust is the most terrifying thing of all.

Still aching over his wife's death, Cody Gunner can't bear the thought of also letting go of his Down's Syndrome brother, Carl Joseph. Cody wants his brother home, where he will be safe and cared for, not out on his own in a world that Cody knows all too well can be heartless and insecure. So when Carl Joseph's teacher, Elle, begins championing his independence, she finds herself at odds with Cody. But even as these two battle it out, they can't deny the instinctive connection they share, and Cody faces a crisis of the heart. What if Elle is the one woman who can teach Cody that love is still possible? If Cody can let go of his lingering anger, he might just see that sometimes the brightest hope of all lies just beyond the clouds.

▼▲
Karen Kingsbury is a #1 New York Times bestselling author of over 60 works of fiction and nonfiction with nearly 25 million copies in print. Widely considered America's favorite inspirational novelist, she is best known for drawing unforgettable characters and stories which evoke a range of emotions. Karen reaches over 100,000 women annually through national speaking appearances. She and her husband, Don, currently reside in Nashville, TN.

▼▲
In characteristically heart-wringing, tear-jerking style, bestselling inspirational novelist Kingsbury finishes the story of Cody Gunner she began in A Thousand Tomorrows. Elle Dalton is director of an Independent Learning Center for Down Syndrome adults when she meets Cody, her student Carl Joseph's brother, who is intent on removing Carl from the center. Romance ensues between Elle, still brokenhearted over being jilted at the altar four years ago, and Cody, an angry bull rider who still grieves the loss of his wife to cystic fibrosis. Meanwhile, it's up to Elleand Carl Josephto show Cody that Down Syndrome adults are capable of much more than most people believe. Kingsbury handles the many point-of-view changes with aplomb, although the chapter told from Carl's perspective is less successful. Some readers may wonder about the literary value of auctioning off a character spot in a novel to the highest bidder (the money goes to charity), as is done here, and there is some telling instead of showing and repetition in the prose. But the plotline is sweeter than sugar, and Kingsbury makes an admirably strong advocacy statement for Down Syndrome adults. Kingsbury's legions of inspirational fiction fans should find this exactly to their taste; new readers will also discover that it reads well as a stand-alone. (Aug.)Copyright 2007 Reed Business Information.

▼▲
Just Beyond the Clouds, Karen Kingsburys sequel to A Thousand Tomorrows, follows Cody Gunners quest for love. Cody decides to move home after the death of his wife, but unexpected complications come up. His brother Carl Joseph, who has Down syndrome, is in an independent-living program that Cody feels is mortally dangerous. In spite of that, Cody finds himself strangely attracted to Elle Dalton, Carl Josephs teacher. Matters become complicated because if Cody wants to pursue Elle, he has to confront not only his grief for his wife but also his fear for Carl Joseph. The book follows the events in Codys life during this epic time of change and turmoil.
Elle is damaged after a traumatic experience in love and has committed herself fully to her work. She thinks she will never find genuine love, but finds fulfillment in her teaching of special-needs adults. Cody has also rejected the thought of love after his wifes death, so, naturally, they both feel an instant connection when they first meet. However, Cody reacts angrily to Elles work, which she obviously does not appreciate, and repeated misunderstandings prevent any relationship early on. Meanwhile, Carl Josephs health rapidly deteriorates.
Although the premise of the book is unique and the topics addressed are unconventional and interesting, the main characters appear more like stereotypes from romantic novels. They seem a bit predictable, and they only infrequently reach any verisimilitude with real people. Many of the minor characters have depth, but they are rarely in the spotlight.
The main characters, Cody and Elle, are a bit one-dimensional. Cody reacts angrily to most of the events in the novel, and Elle tends to think the same few thoughts throughout until the climax. The true personality of the book is found in the secondary characters: Elles students. The scenes of classroom interaction are the most touching episodes in the book, and in a sense they are more emotionally charged than many of the actual love scenes.
Just Beyond the Clouds has some unique facets in plot and theme, but the characterization is less than it could be from this accomplished writer. Kingsbury enthusiasts will enjoy it and fans of A Thousand Tomorrows will find it a must-read. However, romance readers or those interested in sampling the genre may be dissatisfied by the novel due to the predictability of the central characters.  Althea Kalman, Christian Book Previews.com

▼▲
"JUST BEYOND THE CLOUDS was amazing. It captured me in the first chapter and never let me go . . . Karen writes about the sort of love we could all use a little more of."—Richie McDonald, lead singer of Lonestar
"Tender-hearted readers beware! Karen has done it again! After you turn the last page of JUST BEYOND THE CLOUDS and put away the tissues, you will find yourself thinking of the characters again and again. Every time you do, you will smile."—Robin Jones Gunn, bestselling author of the Sisterchicks® novels
"Karen is a gifted writer who confronts the hard issues with truth and sensitivity."—Francine Rivers, bestselling author of Redeeming Love

▼▲
I'm the author/artist and I want to review Just Beyond the Clouds, Cody Gunner Series.
Back
×
Back
×