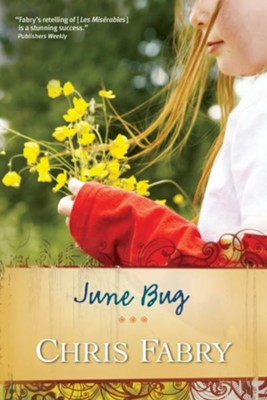 ▼▲
June Bug believed everything her daddy told her. That is, until she walked into Walmart and saw her face on a list of missing children. The discovery begins aa quest for the truth about her father, the mother he rarely speaks about, and ultimately herself. A modern interpretation of Les Miserables, the story follows a dilapidated RV rambling cross-country with June Bug and her father, a man running from a haunted past. Forces beyond their control draw them back to Dogwood, West Virginia, down a winding path that will change their lives forever.

▼▲
From the best-selling author of War Room comes a Christy Award finalist, now a Lifetime original movie called Child of Grace.
“I believed everything my daddy told me until I walked into Wal-Mart and saw my picture on a little poster . . .” For as long as she can remember, June Bug and her father have traveled the back roads of the country in their beat-up RV, spending many nights parked at Wal-Mart. One morning, as she walks past the greeter at the front of the store, her eyes are drawn to the pictures of missing children, where she is shocked to see herself. This discovery begins a quest for the truth about her father, the mother he rarely speaks about, and ultimately herself. But when her father’s past catches up with them, forces beyond his control draw them back to Dogwood, West Virginia, down a winding path that will change their lives forever.

▼▲
June Bug, written by Chris Fabry and based on the play Les Miserables, is a captivating story about a young girl whose existence is composed of traveling in a weather-beaten, rust-eaten, RV with John, the man she calls dad. The novel begins with John and June Bug stranded in a Wal-Mart parking lot where June Bug happens upon a picture of herself on a missing childrens poster. June Bugs vagabond life becomes threatened not only by her desire to know the truth of the photo, but also by Shelia, the perky Wal-Mart associate who becomes increasingly curious about June Bug and John.

From page one, the tone of the book immediately envelopes the reader into the setting. The attention to and description of details involves the reader in the story, and the fresh, original analogies maintain the readers interest. Fabrys ability to allow the reader to develop relationships with the characters is perhaps the strongest aspect of the novel. One notable weakness involves Fabrys lack of build-up to create tension at critical moments in the story; and, although background of characters is certainly important, there were small chunks of background that werent essential to the story.

Although the novel doesnt begin with a character in moral depravity and end with his or her salvation, Christianity is an undercurrent throughout the story. June Bug recounts a time at a VBS in which she prayed and received Jesus. Other characters beliefs are stated or implied. It is left to the reader to discover why certain characters believe the way they do, and whether it is right or wrong. Although Bible verses arent referred to, Matthew 18:3, I tell you the truth, unless you change and become like little children, you will never enter the kingdom of heaven, is evident in June Bugs simple, trusting faith. However, the theme of Christianity could easily be removed from the book without altering the storyline.

For those in search of a good book, June Bug certainly qualifies, leaving readers wishing for more pages after the last one is read. Also worth mentioning are the themes of kidnapping, semi-violent flashbacks, and sexual predators present in the book, making it appropriate for readers fourteen years of age and older.  Emily Morgan, www.ChristianBookPreviews.com

▼▲
Chris Fabry (Dogwood)evangelical fiction author of more than 60 titles and coauthor of Left Behind: The Kid seriesoffers a lovely, moving, present-day account of sacrifice linking to the famed novel Les Misérables. It all begins in a nondescript Wal-Mart parking lot where nine-year-old June Bug sees an artist's rendition of herself on a missing child poster in the store where they've parked their broken-down RV trailer. With questions galore, June Bug starts pestering her dad about their RV vagabond life and where they're headed next. Johnson, little June Bug's father, is obliged to face his past in short order as a series of unexpected media events force his hand and reroute his life. Afraid and emotionally battered, Johnson returns to the scene of the crime and discovers what he thought was lost forever. Fabry's retelling of the world-renowned Victor Hugo tale is a stunning success, and readers will find themselves responding with enthusiastic inner applause. (Aug.) Copyright 2009 Reed Business Information.

▼▲
I'm the author/artist and I want to review June Bug.
Back
Back