Skip to main content
Jumping through Fires: The Gripping Story of One Man's Escape from Revolution to Redemption - eBook
By: David Nasser
Stock No: WW6506EB 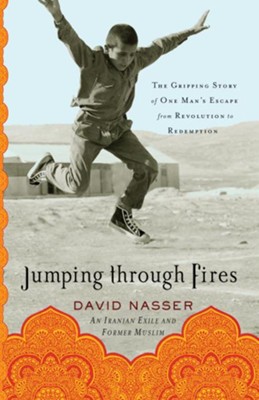 Jumping through Fires: The Gripping Story of One Man's Escape from Revolution to Redemption - eBook

▼▲
Religion has left an undeniable mark in our world. Some see it as the answer to every problem, while others see it as the problem itself. Simply put, religion is the single greatest force in history. But in a much more intimate sense, what does religion mean to one life?

In this honest, suspenseful, and moving memoir, author David Nasser tells of a life filled with heartbreak and healing. Forced to escape from a country gripped in a religious revolution, David and his family run for their lives in an attempt to find refuge. Through the lens of a terrified boy we see the destructive power of religion and the pull of peer pressure as he tries to fit into a new culture.

Nasser's raw and transparent account of his transition from hating religion to having a living faith in Christ will impact readers from across the religious spectrum. His unflinchingly honest, yet humorous, assessment of the church from an outsider's point of view will both enlighten readers and spur them to renewed and refined outreach.

For anyone who has seen the lie of religion, whether in Iran or Alabama or anywhere in between, Nasser offers the truth of Jesus.

▼▲
David Nasser is the founder of David Nasser Outreach. Through radio broadcasts, television programs, and events, he reaches to more than 700,000 people annually with the Gospel of Jesus Christ. The author of Glory Revealed and A Call To Die, Nasser lives with his wife, Jennifer, and their two children in Alabama.

▼▲
I'm the author/artist and I want to review Jumping through Fires: The Gripping Story of One Man's Escape from Revolution to Redemption - eBook.
Back
Back