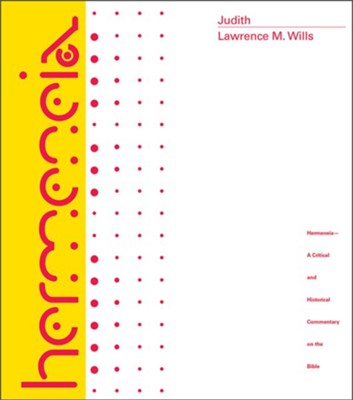 Judith tells the story of a beautiful Jewish woman who enters the tent of an invading general, gets him drunk, and then slices off his head, thus saving her village and Jerusalem. This short novella was somewhat surprisingly included in the early Christian versions of the Old Testament and has played an important role in the Western tradition ever since. This commentary provides a detailed analysis of the text's composition and its meaning in its original historical context, and thoroughly surveys the history of Judith scholarship. Lawrence M. Wills not only considers Judith's relation to earlier biblical texts--how the author played upon previous biblical motifs and interpreted important biblical passages--but also addresses the rise of Judith and other Jewish novellas in the context of ancient Near Eastern and Greek literature, as well as their relation to cross-cultural folk motifs. Because of the popularity of Judith in art and culture, this volume also addresses the book's history of interpretation in paintings, sculpture, music, drama, and literature. A number of images of artistic depictions of Judith are included and discussed in detail.

Lawrence M. Wills is visiting professor of Judaic Studies and Religious Studies at Brown University. He graduated from Harvard University with a degree in social anthropology, and from Harvard Divinity School with an M.T.S. and a Th.D., both in New Testament and Hellenistic Judaism. He taught at Harvard Divinity School, held the Ethelbert Talbot Chair in Biblical Studies at Episcopal Divinity School, and also taught at Wesleyan University. In 2019 he was the Croghan Bicentennial Visiting Professor at Williams College before returning to Brown University as visiting professor. His books include The Jewish Novel in the Ancient World (1995), which was named an Outstanding Academic Book of 1995 by Choice magazine for academic librarians, and also The Quest of the Historical Gospel: Mark, John, and the Origins of the Gospel Genre (1997); Not GodÂs People: Insiders and Outsiders in the Biblical World (2008); and The Jew in the Court of the Foreign King: Ancient Jewish Court Legends (1990). He has also co-edited two books, Conflicted Boundaries in Wisdom and Apocalypticism (with Benjamin G. Wright, 2005), and Jewish Annotated Apocrypha (with Jonathan Klawans, forthcoming).

▼▲
I'm the author/artist and I want to review Judith.
Back
×