Skip to main content
OUR BIGGEST BARGAIN SALE EVER: Over 6,000 deals at never-seen-before prices ~ through 8/23. Shop now >
Jubilees: A Commentary in Two Volumes
Edited By: Sidnie White Crawford
By: James C. VanderKam
Stock No: WW660355 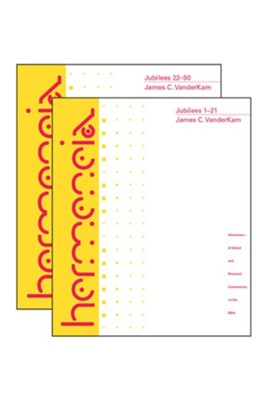 Jubilees: A Commentary in Two Volumes

Jubilees--so called because of its concern with marking forty-nine-year periods (or "jubilees") in Israel's history--is an ancient rewriting of Genesis and the first part of Exodus from the point of view of an anonymous second-century BCE Jewish author. Its distinctive perspective--as well as its apparent popularity at Qumran--make it particularly important for any reconstruction of early Judaism. James C. VanderKam, the world's foremost authority on Jubilees, offers a new translation based on his own critical editions of all the available textual evidence, including the Hebrew fragments preserved at Qumran (which he first published in Discoveries in the Judean Desert, vol. 13), as well as the first full running commentary on the book in the English language. Jubilees approaches the book as a rewriting of scripture but also as a literary work in its own right. The commentary explains the text and the teachings of the author with comprehensive coverage of the modern scholarship devoted to them. The introduction sets the book in its second-century BCE context, traces its sources in the Bible and in other early Jewish texts, and describes its influence on Jewish and Christian writers.

James C. VanderKam is John A. O'Brien Professor of Hebrew Scriptures at the University of Notre Dame. He has edited thirteen volumes in the series Discoveries in the Judaean Desert and is a member of the editorial committee for the remaining unpublished Dead Sea scrolls. He is one of the two editors in chief of the Encyclopedia of the Dead Sea Scrolls (2000) and author of the prize-winning The Dead Sea Scrolls Today (1994), From Revelation to Canon: Studies in the Hebrew Bible and Second Temple Literature (2000), An Introduction to Early Judaism (2001), The Meaning of the Dead Sea Scrolls (2002), and From Joshua to Caiaphas: High Priests after the Exile (Fortress, 2004). Prof. VanderKam is the former editor of the Journal of Biblical Literature.

"James VanderKam's masterful commentary on the Book of Jubilees is a landmark achievement. It has all the qualities we hope for in a scholarly commentary--and much more. The sheer learning is stunning. The research is painstaking. The coverage of the secondary literature is exhaustive and balanced. The textual analysis is careful and perceptive. And not least, the writing is cogent, accessible and jargon-free. Certain to become the standard reference-work, VanderKam's commentary is a fitting tribute to a scholar who has devoted a lifetime of study to one of the most fascinating, challenging, and influential documents from Judaism of the Second Temple period." --William Adler, Distinguished University Professor, North Carolina State University

"Since the appearance forty years ago of his book on Textual and Historical Studies in the Book of Jubilees (1977), James VanderKam is the leading expert in the study of the book of Jubilees. He wrote more than fifty articles and books on the subject. In 1989, he published the critical edition of the text as well as a complete translation, which nowadays are considered as the standard edition and translation of the book. As a crown on his work this detailed and extensive commentary in the Hermeneia series is published. It combines the fruits of the earlier studies with new insights important for future research. The translation is provided with detailed textual notes based on all the manuscript evidence of the book we have in Hebrew, Syriac, Greek, Latin, and Ethiopic (Ge'ez). Important issues in the study of the book, such as literary composition, date and author, teachings, sources and reception are presented in an unsurpassed lucid written style. The attention for the literary composition and structure adds tremendously to the thorough verse-by-verse commentary, which digests all relevant scholarly discussions. This exemplary work will set the standards for all future studies in the book of Jubilees." --Jacques van Ruiten, Professor in the Reception History of the Bible, University of Groningen

"James VanderKam's positions on authorship, literary coherence, historical, and religious issues are clearly drawn and reflect the history of scholarship on each of these issues. His focus always lands on the text itself, especially on its relationship to the Hebrew Bible texts which it 'rewrites'. He demonstrates a marvelous ability to present differing opinions judiciously and fairly: disagreements with other scholars are characterized by gentility and they always lead to a deeper understanding of the issue contested. Fascinating glimpses of the reception history of the book--Jewish and Christian--tantalize the reader. Finally, his way of proceeding provides an amazing picture of Judaism and its literature of the last two centuries BCE." --John C. Endres, Jesuit School of Theology of Santa Clara University, Graduate Theological Union, Berkeley

"James VanderKam has studied the Book of Jubilees for more than forty years, beginning with his dissertation at Harvard. He has edited the Ethiopic text and the Hebrew fragments from the Dead Sea Scrolls. No scholar has ever been so well qualified to write a commentary on this major document of Judaism between the Bible and the Mishnah. This magisterial volume is simply the most thorough and most authoritative commentary on Jubilees ever written." --John J. Collins, Holmes Professor of Old Testament, Yale Divinity School

"The fields of biblical and post-biblical studies, Dead Sea Scrolls, ancient Judaism, and early Christianity have been in need of this kind of commentary for some time, and VanderKam has provided one that will serve as a foundation for all subsequent scholarship on the Book of Jubilees." --Michael Segal, Otsuki Professor of Biblical Studies, Hebrew University in Jerusalem

▼▲
I'm the author/artist and I want to review Jubilees: A Commentary in Two Volumes.
Back