Skip to main content
CYBER WEEK SALE! Spot great deals up to 88% off. >
A Journey to Victorious Praying: Finding Discipline and Delight in Your Prayer Life
By: Bill Thrasher
Stock No: WW415638 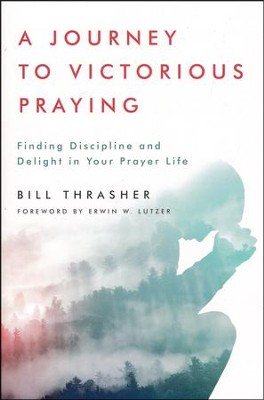 A Journey to Victorious Praying: Finding Discipline and Delight in Your Prayer Life

▼▲
If you've ever felt too busy, confused, or unmotivated to pray, this book is for you. Packed with godly advice and powerful stories--and divided perfectly for daily reading--it can renovate your prayer life in the course of a month. A Journey to Victorious Praying will help anyone who wants to pray more often, more deeply, and with greater faith.

Why is it so hard to pray?

It’s something many Christians can relate to: the desire to pray but the failure to execute. A Journey to Victorious Praying will tell readers why this is—and how to move past it.

Addressing common misconceptions about prayer, then offering biblical truths and practices instead, Bill Thrasher teaches readers how to:

Filled with practical insight and pastoral warmth, this book will give readers renewed enthusiasm for embarking on the essential journey of prayer. And its brief chapters, organized around various themes, make it perfect for quick reference, as does the appendix with tips for stimulating prayer.

▼▲
WILLIAM D. THRASHER (B.S., Auburn University; Th.M., Th.D., Dallas Theological Seminary) has served on the faculty of Moody Theological Seminary since 1980 and on the graduate school faculty since 1990, where he oversees the Master's Program in Spiritual Formation and Discipleship. He is a frequent speaker in churches and retreats across the county. He has written numerous articles on a variety of subjects related to Christian living. His books include, Living the Life God has Planned, A Journey to Victorious Praying, Believing God for His Best, and Putting God Back into the Holidays published by Moody Publishers and he has also written How to be a Soul Physician, The Attributes of God in Pauline Theology, and Principles of Christian Living from Romans 5-8. He has written ¿Jonah¿ in the Moody Bible Commentary and has authored two online courses: Biblical Spiritual Formation and Biblical Spiritual Formation Lab 1. He is married to Penny and they have three sons- Will, Michael, and David.

DR. ERWIN W. LUTZER is Pastor Emeritus of The Moody Church in Chicago where he served as the Senior Pastor for 36 years. A renowned theologian, Dr. Lutzer earned his BTh from Winnipeg Bible College, a ThM from Dallas Theological Seminary, a MA in philosophy from Loyola University, and an honorary LL.D. from the Simon Greenleaf School of Law. He is an award-winning author and the featured speaker on three radio programs that can be heard on more than 1000 outlets in the United States and around the world. Dr. Lutzer and his wife, Rebecca, live in the Chicago area and have three grown children and eight grandchildren.

▼▲
I'm the author/artist and I want to review A Journey to Victorious Praying: Finding Discipline and Delight in Your Prayer Life.
Back
Back