A Journey through Emotional Abuse: From Bondage to Freedom
By: Caroline Abbott, Debbie Stafford 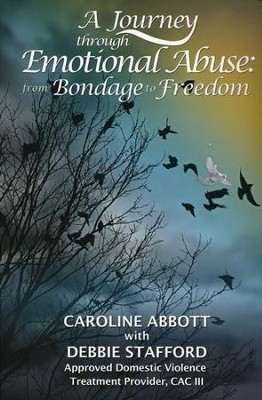 A Journey through Emotional Abuse: From Bondage to Freedom

▼▲
One in four women will experience domestic abuse in her lifetime. Many Christians believe domestic abuse doesn't occur in Christian homes. Sadly, "religion is not a deterrent. A Journey through Emotional Abuse provides abused women with bite-size pieces of important information, along with emotional support. It equips women with assistance if for their own safety they should need to leave him, and where to find help.

Tell us a little about yourself.  I am a Christian woman who was married for twenty years to a man I thought was also a Christian. My husband was cruel to me, and told me his behavior was my fault. I became increasingly unhappy in my marriage as time went by, and it wasn't until very late in the marriage that I realized I was being emotionally abused.

What was your motivation behind this project?  When I finally separated from my husband, I began writing the book to help other Christian women. I had met so many who were struggling just as I had, trying to honor the Lord and their marriage vows. Despite everything they tried, they were so unhappy. Many were afraid of their husbands; some were afraid for their lives! Often, their churches made their situations more difficult for them, confusing them even further.

What do you hope folks will gain from this project?  I hope women in emotionally-abusive relationships will begin to grasp how much God loves them, and how precious they are to Him. My book is designed to provide them a greater understanding of what abuse actually is, and how their abuser has been manipulating themsometimes misrepresenting Bible verses in defense of his behavior. I hope they will gain confidence as I walk them through many passages of the Bible that talk about abuse. Many of these verses are never discussed in churches. I also describe the difficult decisions they might have to make, and help them find the support they need to feel informed and at peace.

How were you personally impacted by working on this project?  Writing this book was very healing for me. I was able to realize the true extent of God's love for me. In order to write the book, I trained to be a domestic violence advocate, so I also learned more about the dynamics of abuse. Because of my training, I have been able to help many women through my website.

Who are your influences, sources of inspiration or favorite authors / artists?  My greatest influence is Jesus and the Bible, as well as godly Christian women. As for other authors, I leaned heavily on The Verbally Abusive Relationship by Patricia Evans, and Why Does He DO That?, by Lundy Bancroft, for the purposes of writing this book. Currently, my favorite fiction authors are Dee Henderson, T. Davis Bunn, Lynn Austin, and Beverly Lewis.

Anything else you'd like readers / listeners to know:  There can be life after abuse. During my abusive marriage, I could not envision a future for myself: I was only hoping to die. The Lord showed me that I didn't have to live in bondageno one should! Jesus came to earth so we could live in freedom. Freedom does not necessarily have to come through divorce. Abusive marriages can be saved, but the victim must be willing to take action. I pray this book will be a blessing to everyone who reads it.