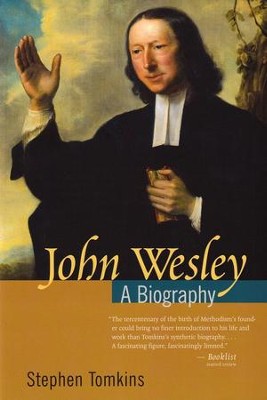 ▼▲
The life and work of John Wesley have had an enormous influence on modern Christianity, including his role as founding father of the Methodists, now 33 million strong worldwide. In this lively biography, journalist Tomkins narrates the story of Wesley's colorful and dramatic life for a new generation.

▼▲
A compelling portrait of the father of Methodism. The life and work of John Wesley (1703-1791) has had an enormous influence on modern Christianity, not least for his role as father of the Methodist church. John Wesley is a popular biography of the great figure, which brings his career and ideas alive for a new generation. Written with verve and grounded in thorough research, the book tells the story of Wesley's colorful and dramatic life. Stephen Tomkins chronicles Wesley's family background and early childhood, his school and university career, and his adult life as a religious leader in England. Throughout this engaging portrait, Tomkins pauses to explore a number of key issues in Wesley's increasingly rich religious views, including the renunciation of wealth and the role of women in church life. The volume concludes with an important assessment of Wesley's abiding influence both in his own country and abroad. Superbly crafted, John Wesley will interest those from the Methodist tradition as well as all general readers of church history.

▼▲
Stephen Tomkins' biography of John Wesley is a wonderful, engaging introduction to the life of this religious titan. Overall, Wesley's life was so complex and his own writing, preaching and activism spanned so many decades that studying Wesley's life pretty much takes a reader's lifetime of attention.
Here's one example: Just examining the twists and turns of Wesley's long contemplation of slavery is a fascinating sub-chapter in his lengthy career. To his credit, after years of studying the issue, Wesley finally "got it right" on slavery and came down solidly in opposition to the evil institution. In fact, Wesley turned out to be more outspoken on slavery than many of his American Methodist brethren were prepared to accept!
Wesley's life is a remarkable and inspirational journey of faith. To glimpse his life in a single lively "gulp" of reading, one cannot do better than Stephen Tomkins' superb biography.

▼▲
I'm the author/artist and I want to review John Wesley: A Biography.
Back
Back