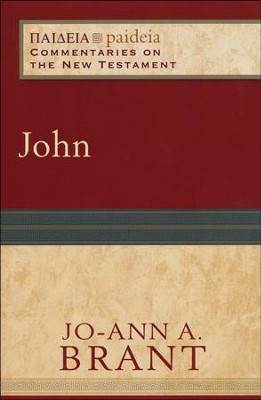 ▼▲
The Gospel of John, full of striking language and symbolism, is familiar to many as a sourcebook of favorite quotations. However, it is far more difficult to read this complex and subtle Gospel as a coherent whole on its own terms. In John to the well-received Paideia New testament commentary [PCNT] series, an expert on John's use of ancient dramatic rhetoric conventions helps students and pastors do just that.

This commentary, like each in the projected eighteen-volume series, proceeds by sense units rather than word-by-word or verse-by-verse. Thus, while it focuses on meaning, its major concerns are rhetorical and literary structure.

• attending to the ancient narrative and rhetorical strategies the text employs
• showing how the text shapes theological convictions and moral habits
• commenting on the final, canonical form of each New Testament book
• focusing on the cultural, literary, and theological settings of the text
• making judicious use of maps, photos, and sidebars in a reader-friendly format

This commentary, like each in the projected eighteen-volume series, proceeds by sense units rather than word-by-word or verse-by-verse.

▼▲
Jo-Ann A. Brant (PhD, McMaster University) is professor of Bible, religion, and philosophy at Goshen College in Goshen, Indiana. She is the author of Dialogue and Drama: Elements of Greek Tragedy in the Fourth Gospel and has contributed to several books.

▼▲
This marvelous commentary is packed with substantive information and fresh insights. Brant draws on current literary approaches and an array of useful sources from antiquity to illumine John's Gospel. She likewise makes the complexities of the Greek text intelligible for English readers. One may disagree with interpretations at points, but I find them consistently stimulating and well thought-out. As with other volumes in the Paideia series, this one is masterfully designed to provide optimum access for readers.
-Craig S. Keener
Professor of New Testament, Asbury Theological Seminary

Among the spate of commentaries published on John's Gospel, Brant's is distinctive and distinguished. Informed by Greco-Roman rhetoric and sources, archaeology, maps, and arresting sidebars, the commentary excels for the classroom. It may well become the text of choice for the university classroom and will enhance appreciation of the Bible as literature. The author and publisher merit commendation, especially for the layout and the inclusion of many illustrative figures that catch the eye and tables that facilitate grasp of content.
-Willard Swartley,
Professor Emeritus of New Testament, Associated Mennonite Biblical Seminary

Brant skillfully mines the Greco-Roman literary, rhetorical, and social world of the Fourth Gospel and writes with brevity that moves the reader briskly along from one fresh insight to the next. The result is paideia--a wonderfully formative experience!
-R. Alan Culpepper,
Dean, McAfee School of Theology, Mercer University

Jo-Ann Brant has written a commentary that thoughtfully leads the reader deeply into the Gospel of John as well as the Greco-Roman world that shaped it. Students who read carefully will be rewarded with not only with a profoundly enriched understanding of the Gospel but also a solid introduction to Greco-Roman literary, rhetorical, and dramatic traditions.
-Colleen M. Conway,
Professor of Religious Studies,
Seton Hall University

Jo-Ann Brant is attentive to both the background and the reception history of the Gospel. She first traces the narrative flow of each section of the Gospel and then explores some of the theological issues that emerge from it. Drawing on everything from Greco-Roman rhetoric to Shakespeare to modern American pop culture, Brant offers fresh perspectives on specific points in virtually every chapter, provides a coherent picture of the Gospel as a whole, and identifies resources for the reader to explore further. By any measure, a significant and welcome contribution.
-J. Ramsey Michaels
Professor of Religious Studies Emeritus, Missouri State University

Jo-Ann Brant has written a commentary on the Fourth Gospel that is ideal for the classroom and the pastor's study, while also proving useful to the scholar. She serves as an authoritative guide to the world of ancient literature and makes two major contributions. First, by paying close attention to the intricacies of the Johannine narrative, she demonstrates in considerable detail the sophistication with which the Fourth Gospel was constructed. Second, she gives attention to both the Jewish and Hellenistic backgrounds of the Fourth Gospel without overemphasizing one at the expense of the other. I recommend this commentary highly.
-Chris Keith,
Assistant Professor of New Testament and Christian Origins, Lincoln Christian University

Brant engages extensively with both ancient and modern sources in such a way that the student receives an introduction to major figures and currents in both the ancient world and modern scholarship on John. Her special focus on ancient rhetoric includes explanation of the terms and techniques, providing the student with a lively working introduction to this field of study. Her commentary is clear, concise, and engaging, with many insights that provide an important supplement to the more conventional and comprehensive commentaries.
-Rodney A. Whitacre,
Professor of Biblical Studies, Trinity School for Ministry

▼▲
I'm the author/artist and I want to review John: Paideia Commentaries on the New Testament [PCNT].
Back
×
Back
×