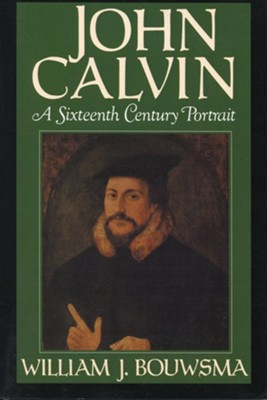 ▼▲
(PUBOxford)Bouwsma has given us a biography that is different from most of its predecessors. here we meet a vulnerable, anxious Calvin; Calvin the Renaissance man; Calvin the evangelical apologist and systematizer. Bouwsma discovers themes and discontinuities never fully exposed before. ''Will require at least a decade to sort through Bouwsma's findings,''---Times Literary Supplement. 310 pages, paper.

▼▲
Historians have credited--or blamed--Calvinism for many developments in the modern world, including capitalism, modern science, secularization, democracy, individualism, and unitarianism. These same historians, however, have largely ignored John Calvin the man. When people consider him at all, they tend to view him as little more than the joyless tyrant of Geneva who created an abstract theology as forbidding as himself.
This volume, written by the eminent historian William J. Bouwsma, who has devoted his career to exploring the larger patterns of early modern European history, seeks to redress these common misconceptions of Calvin by placing him back in the proper historical context of his time.
Eloquently depicting Calvin's life as a French exile, a humanist in the tradition of Erasmus, and a man unusually sensitive to the complexities and contradictions of later Renaissance culture, Bouwsma reveals a surprisingly human, plausible, ecumenical, and often sympathetic Calvin. John Calvin offers a brilliant reassessment not only of Calvin but also of the Reformation and its relationship to the movements of the Renaissance.

William J. Bouwsma is Sather Professor of History at the University of California, Berkeley. He is also the author of the highly-acclaimed Venice and the Defense of Republican Liberty: Renaissance Values in the Age of the Counter-Reformation.

▼▲
I'm the author/artist and I want to review John Calvin: A Sixteenth-Century Portrait.
Back
×