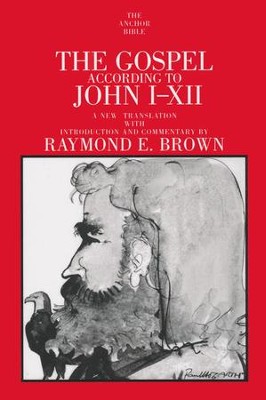 ▼▲
In this century an enormous amount of literature has been devoted to the Fourth Gospel. Raymond E. Brown's commentary has been influenced by a lot of works from various schools of thought and traditions. This commentary is the first book of a three-volume translation of and commentary on John and Johannine Epistles. It contains an introduction to the whole Gospel and a treatment of chapters 1-12, or the Johannine account of the public ministry of Jesus.

Raymond E. Brown, S.S., Ph.D. was internationall regarded as a dean of New Testament scholars. He was Auburn Distinguished Professor Emeritus of Biblical Studies at Union Theological Seminary in New York City. Among his more than thirty-five books on the Bible are three volume in the Anchor Bible series.

In the first volume of Raymond E. Brown’s magisterial three-volume commentary on the Gospel According to John, all of the major Johannine questions—of authorship, composition, dating, the relationship of John to the Synoptics (Mark, Matthew, and Luke)—are discussed. The important theories of modern biblical scholarship concerning John are weighed against the evidence given in the text and against prevailing biblical research. In sum, what is attempted is a synthesis of the major scholarly insights that bear on the Fourth Gospel.

The translation—as Father Brown states at the outset—strives not for any formal beauty but rather for an accurate and contemporary version: “the simple, everyday Greek of the Gospel has been rendered into the ordinary American English of today.” The result is a translation that will strike the reader with uncommon immediacy.

Father Brown also analyzes, in the appendixes, the meaning, use, and frequency of certain key words and phrases that occur in John, and examines the differences between the Johannine and Synoptic treatments of the miracle stories.
The chapters of the Gospel translated here in Volume 29 (1–12) comprise the Prologue, which opens with the famous “In the beginning was the Word,” and the Book of Signs, an account of the miracles of Jesus and of his ministry.

Over his illustrious career, Raymond E. Brown, S.S., Ph.D., was internationally regarded as a dean of New Testament scholars. He was Auburn Distinguished Professor Emeritus of Biblical Studies at Union Theological Seminary in New York City. Among his more than thirty-five books on the Bible are three volumes in the Anchor Bible series, as well as the Anchor Bible Reference Library volumes The Birth of the Messiah, The Death of the Messiah, and An Introduction to the New Testament, winner of the 1998 Catholic Press Association Award for Biblical Studies.