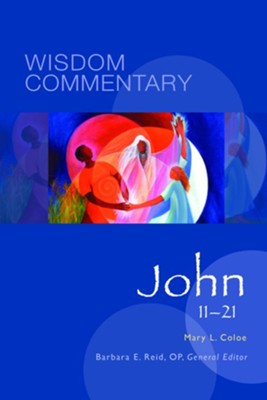 Teaching and researching the Gospel of John for thirty years has led author Mary L. Coloe to an awareness of the importance of the wisdom literature to make sense of Johannine theology, language, and symbolism: in the prologue, with Nicodemus, in the Bread of Life discourse, with Mary and Lazarus, and in the culminating "Hour." She also shows how the late Second Temple theology expressed in the books of Sirach and Wisdom, considered deuterocanonical and omitted from some Bible editions, are essential intertexts. Only the book of Wisdom speaks of "the reign of God" (Wis 10:10), "eternity life" (Wis 5:15), and the ambrosia maintaining angelic life (Wis 19:21)—all concepts found in John’s Gospel.

While the Gospel explicitly states the Logos was enfleshed in Jesus, this is also true of Sophia. Coloe makes the case that Jesus’s words and deeds embody Sophia throughoutthe narrative. At the beginning of each chapter Coloe provides text from the later wisdom books that resonate with the Gospel passage, drawing Sophia out of the shadows.

▼▲
Mary L. Coloe, PBVM, is professor of New Testament at Yarra Theological Union, a college of the University of Divinity in Melbourne. Mary taught for over twenty years at Australian Catholic University and also at Boston College, the Jesuit School of Theology in Berkeley, and in Jerusalem. Mary has many academic publications on the Gospel of John, as well as books to help parents and teachers, such as A Friendly Guide to John, The Two Hands of God, and A Friendly Guide to the Birth of Jesus. Mary has also written an introduction to the Johannine literature for the new revised edition of the Jerome Biblical Commentary.
Barbara E. Reid, general editor of the Wisdom Commentary series, is a Dominican Sister of Grand Rapids, Michigan. She is the president of Catholic Theological Union and the first woman to hold the position. She has been a member of the CTU faculty since 1988 and also served as vice president and academic dean from 2009 to 2018. She holds a PhD in biblical studies from The Catholic University of America and was also president of the Catholic Biblical Association in 2014–2015. Her most recent publications are Wisdom’s Feast: An Invitation to Feminist Interpretation of the Scriptures (Eerdmans, 2016) and Abiding Word: Sunday Reflections on Year A, B, C (3 vols.; Liturgical Press, 2011, 2012, 2013).
Mary Ann Beavis is professor emerita of religion and culture at St. Thomas More College (Saskatoon, Canada). She received MA degrees from the University of Manitoba and the University of Notre Dame; she holds a PhD from Cambridge University (UK). Her areas of interest and expertise include Christian origins, feminist biblical interpretation, Christianity and Goddess spirituality, and religion and popular culture. She is the author of several single-author and edited books as well as many peer-reviewed journal articles, book chapters, and book reviews.