Skip to main content
Jews, God and History
By: Max I. Dimont
Stock No: WW29405 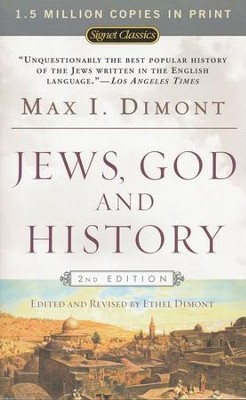 ▼▲
Discover how Jews have survived through fighting, attempted annihilation, and strife through hundreds of years; find out what qualities mark this culture from which Moses, Christ, Spinoza, Marx, Freud, and Einstein came to us. The author traces the history of the Jewish people through 4000 years and six civilizations, examining the nation of God's Chosen People. 572 pages; Signet Classic; 2nd edition.

▼▲
From ancient Palestine through Europe and Asia, to America and modern Israel, Max I. Dimont shows how the saga of the Jews is interwoven with the story of virtually every nation on earth.

▼▲
Max I. Dimont, author of The Indestructible Jews, The Jews in America, The Amazing Adventures of the Jewish People, and Appointment in Jerusalem, was born in Helsinki, Finland, and came to the United States in 1930. He taught himself English by reading Shakespeare’s plays, the Bible, and American plays translated into Finnish. After serving in intelligence with the U.S. Army during World War II, he worked in public relations and employee relations for Edison Brothers Stores in St. Louis. Following the first publication of the bestselling Jews, God and History, he lectured extensively on Jewish history throughout the United States, Canada, South Africa, Brazil, and Finland until his death in 1992.

▼▲
I'm the author/artist and I want to review Jews, God and History.
Back
Back