BRING CHRISTMAS HOME SALE: Save up to 85% through 11/2 >
Jewel of Persia
By: Roseanna M. White 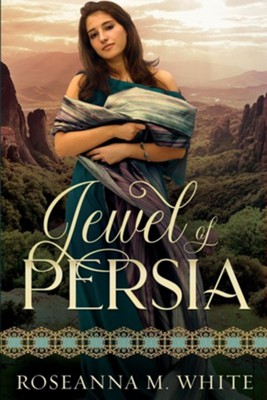 ▼▲
How can she love the king of kings without forsaking her Lord of lords? Kasia grew up in a poor Jewish home with more siblings than luxuries. But when a chance encounter forces her to the palace of Xerxes, she becomes a concubine to the richest man in the world. She alone, of all Xerxes' wives, loves the man beneath the crown. She alone, of all his wives, holds the heart of the king of kings. Traveling with Xerxes through Europe as he mounts a war against Greece, Kasia knows enemies surround her, but they re not the Spartans or Athenians. The threat lies with those close to the king who hate her people. She determines to put her trust in Jehovah even if it costs her her marriage. Years of prayers are answered when Kasia's childhood friend arrives at the palace after the war, but even as she determines to see Esther crowned in place of the bloodthirsty former queen, she knows the true battle is far from over. How far will her enemies go to see her undone? Combining the biblical account of Esther with Herodotus's Histories, Jewel of Persia is the story of a love that nearly destroys an empire . . . and the friendship that saves a nation.

▼▲
I'm the author/artist and I want to review Jewel of Persia.
Back
×