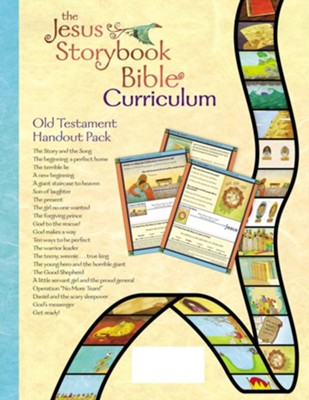 ▼▲
Send The Jesus Storybook Bible Curriculum lessons home with the Old Testament Handout Pack! Each full color glossy page includes an activity, memory verse and note for parents - all of which reinforce the lesson. Kids will want to keep the beautiful artwork that directly matches The Jesus Storybook Bible. You'll need one Old Testament set (21 handouts) and one New Testament set (23 handouts) per child for class. (These are printed versions of the same handouts provided on the curriculum kit DVD-ROM.)

Sally Lloyd-Jones is a New York Times bestselling writer and frequent performer of her work. She has written over 25 books, spanning the Christian and the general markets. Her work has been critically acclaimed by both the Wall Street Journal and the New York Times. Her books (which are written for children, but lots of adults are reading) include: The Jesus Storybook Bible, winner of the Platinum Book Award; Thoughts To Make Your Heart Sing, winner of the Association of Christian Publisher’s Book of the Year Award in the adult inspiration category; How to be a Baby, a New York Times Notable Book of the Year; Song of the Stars; as well as board books like Found and Loved for her tiniest readers. Sally was raised in Africa, at a boarding school in England, studied at the Sorbonne in Paris, and now lives in NYC.  She can be found at www.sallylloyd-jones.com

Sam Shammas has a Master’s degree in English Literature from St Peter's College, Oxford University and trained at the Ecole Jacques Lecoq in Paris. She worked for six years at All Souls Church Langham Place in London, where she co-wrote and developed Christianity Explored, Discipleship Explored, and CY (a curriculum for youth based on Mark’s Gospel). She currently works at Redeemer Presbyterian Church in New York, where she co-wrote and developed the curriculum for Timothy Keller’s The Reason for God and The Prodigal God, as well as an eight-week discipleship curriculum, Gospel in Life

▼▲
I'm the author/artist and I want to review Jesus Storybook Bible Curriculum Kit Handouts, Old Testament.
Back
×
Back
×