Skip to main content
Jesus and the Remains of His Day: Studies in Jesus and the Evidence of Material Culture
By: Craig A. Evans
Stock No: WW707054 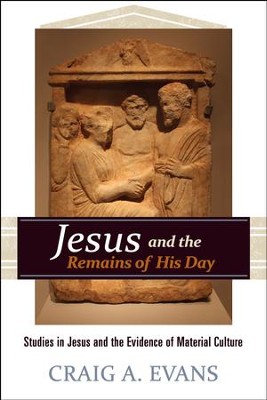 By: Craig A. Evans
Hendrickson Publishers / 2015 / Hardcover
5 out of 5 stars for Jesus and the Remains of His Day: Studies in Jesus and the Evidence of Material Culture (2 Reviews) Write a Review
Expected to ship on or about 07/13/21.
Email me when this product is available.
Stock No: WW707054

▼▲
Archaeological evidence is essential for enhancing our understanding of Jesus' life and the society in which he lived. Illuminating the material culture of the first century, Craig Evans offers 13 essays exploring topics such as the importance of artifacts, hanging and crucifixion in Second Temple Israel, postmortem beliefs in Jewish and pagan epitaphs, and more.

This book is a collection of thirteen articles on various aspects of how archaeological evidence enlightens our understanding of the life and death of Jesus and the culture in which he lived. Nine of the books thirteen essays were published previously, though several of these have been revised or augmented for inclusion in the present book; four of the books essays are new. Several of the essays deal with the death of Jesus and the burial practices of his day.

Articles in the book include:
- A Fishing Boat, a House, and an Ossuary: What Can We Learn from the Artifacts
- A Tale of Two Cities: What We Have Learned from Bethsaida and Magdala
- Jewish Scripture and the Literacy of Jesus
- Jesus, Healer and Exorcist
- Hanging and Crucifixion in Second Temple Israel
- Excavating Caiaphas, Pilate, and Simon of Cyrene: Assessing the Literary and Archaeological Evidence
- The Family Buried Together Stays Together
- Post-Mortem Beliefs in Jewish and Pagan Epitaphs

The books introduction explains the value of material culture (i.e., archaeological evidence) for interpreting Jesus and the Gospels and discusses the limits of such evidence. Also, the author is including several of his own photos in this book.

▼▲
I'm the author/artist and I want to review Jesus and the Remains of His Day: Studies in Jesus and the Evidence of Material Culture.
Back
Back