Skip to main content
BIBLE SALE OF THE SEASON: For a Limited Time ~ Save on over 1,100 Bibles!
Jesus the King: Understanding the Life and Death of the Son of God
By: Timothy Keller
Stock No: WW486661 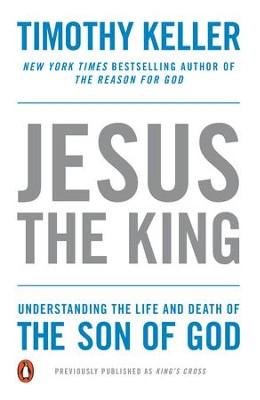 Jesus the King: Understanding the Life and Death of the Son of God

▼▲
An insightful and revelatory look at the life of Christ by the man Newsweek called "a C.S. Lewis for the 21st century." Join Keller as he explores the Gospel of Mark; demonstrates how the story of Jesus is cosmic, historical, and personal; and encourages you to re-examine your relationship with God. Previously published as King's Cross. Softcover.

The most influential man to ever walk the earth has had his story told in hundreds of different ways for thousands of years. Can any more be said?

Now, Timothy Keller, New York Times bestselling author of The Prodigal Prophet and the man Newsweek called a "C. S. Lewis for the twenty-first century," unlocks new insights into the life of Jesus Christ as he explores how Jesus came as a king, but a king who had to bear the greatest burden anyone ever has. Jesus the King is Keller’s revelatory look at the life of Christ as told in the Gospel of Mark. In it, Keller shows how the story of Jesus is at once cosmic, historical, and personal, calling each of us to look anew at our relationship with God. It is an unforgettable look at Jesus Christ, and one that will leave an indelible imprint on every reader.

▼▲
Timothy Keller was born and raised in Pennsylvania and educated at Bucknell University, Gordon-Conwell Theological Seminary, and Westminster Theological Seminary. His first pastorate was in Hopewell, Virginia. In 1989 he started Redeemer Presbyterian Church in New York City with his wife, Kathy, and their three sons. Today, Redeemer has nearly six thousand regular Sunday attendees and has helped to start more than three hundred new churches around the world. He is the author of The Songs of Jesus, Prayer, Encounters with Jesus, Walking with God Through Pain and Suffering, Every Good Endeavor, and The Meaning of Marriage, among others, including the perennial bestsellers The Reason for God and The Prodigal God.

Praise for Timothy Keller and Jesus the King

"Much of Redeemer is remarkably traditional. What is not traditional is Dr. Keller's skill in speaking the language of his urbane audience . . . Observing Dr. Keller's professorial pose on stage, it is easy to understand his appeal." —The New York Times

"Fifty years from now, if . . . Christians are widely known for their love of cities, their commitment to mercy and justice, and their love of their neighbors, Tim Keller will be remembered as a pioneer of the new urban Christians." —Christianity Today

"In discussing the identity of Jesus, the author describes him as a man both deeply embedded within his culture and times while also living counter to them in many ways. . . . The author describes a man aware of his upcoming sacrifice, and indeed, a man in continual sacrifice, as he had descended from heaven to live on earth. Captivating reading from a Christian perspective." —Kirkus Reviews

"Keller engages the reader with astute pastoral application, littered with excellent sermon illustrations. . . . [Jesus the King] finds Keller in familiar territory: producing another great book, leaving readers from atheist to Christian grappling with the nature and implications of the gospel of Jesus Christ." —Michael Johnson, DesiringGod.org

"This is the book where Tim Keller hits his stride as an author. . . . Keller directs readers' gazes toward the cross and will not allow them to look away." —Collin Hansen, The Gospel Coalition

▼▲
I'm the author/artist and I want to review Jesus the King: Understanding the Life and Death of the Son of God.
Back
Back