Jesus Is: Find a New Way to Be Human
By: Judah Smith 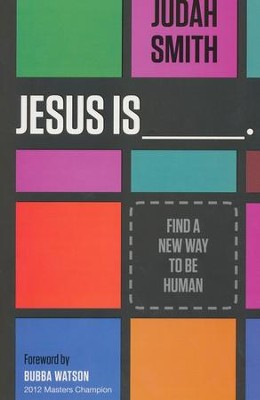 Jesus Is: Find a New Way to Be Human

▼▲
Three years ago, Judah Smith, pastor of the City Church in Seattle, Washington, wanted to get people thinking about Jesus. He didn't want to promote his church or a certain denomination, he just wanted to see what people thought of Him, to let them fill in the answer to "Jesus Is ____". That campaign resulted in billboards, bus signs, facebook ads, and a website where people shared their reactions and thoughts. The reactions ranged all over. Many were positive affirmations and declarations of faith, others were painful and serious expressions of doubt, and others were downright blasphemous.
After the experiment, Smith had a new mission--to share what the Bible says about who Jesus is. In this book, Smith hopes to fill in the blank for believers, seekers, and atheists alike, who wonder who Jesus is and what He's about. Using humorous anecdotes, mixed with real-life stories, Biblical insight, and filtered through his curious and somewhat ADD brain, Smith presents a robust portrait of the character of Jesus. He is Someone who loves you more than you can imagine, who wants to show you what real life is, and most of all wants to make you a better human, by becoming who you were made to be.

Jesus is . How would you finish thatsentence?

The subjectis there, and so is the verb, but what comes next? Your answer could shed lighton the path to becoming who you were made to be.

In thesepages, Judah Smith fills out that sentence again and again, each time furtherrevealing the character of Jesus. He writes as if to a friend, illustrating theimportance of Christ’s message to modern men and women. This is a book for newbelievers, for lifelong followers, and for the merely curious.

Judah Smith shows us the Jesus that somber paintingsand hymns fail to capture. With passion, humor, and conviction, he shows thatJesus is life. Jesus is grace. Jesus is your friend. Jesus is a new and betterway to be human.

Judah Smith is the lead pastor of Churchome, formerly named the City Church. Churchome is a thriving multisite church noted for its cultural relevance, commitment to biblical integrity and faith, and love for Jesus. Judah is known around the United States and the world for his preaching ministry. His fresh, practical, humorous messages demystify the Bible and make Christianity real. Judah is also the author of the New York Times bestselling book Jesus Is _ and coauthor of I Will Follow Jesus Bible Storybook.

Judah Smith and his wife, Chelsea, are the lead pastors of The City Church in Seattle, Washington. They were youth ministry pastors for ten years (ranked as one of the top five "most dynamic" youth groups in the country by Ministry Today) before stepping into their new role in 2009. Outreach has recognized City Church as being one of the fastest growing churches in the country. It has four satellite locations orbiting the Seattle, WA metropolitan area. Judah is in high demand as speaker, both in the U.S. and abroad, is the author of several books including Jesus Is..., and is a popular voice on Twitter (@judahsmith). Judah and Chelsea have three children: Zion, Eliott, and Grace.

▼▲
I'm the author/artist and I want to review Jesus Is: Find a New Way to Be Human.
Back
×
Back
×