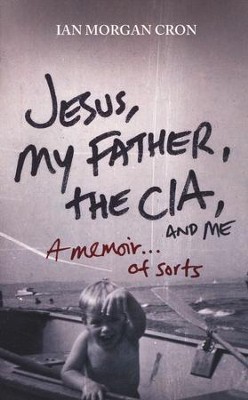 Jesus, My Father, the CIA, and Me: A Memoir of Sorts

▼▲
At the age of sixteen, Ian Morgan Cron was told by his mother that his father, a motion picture executive, worked with the CIA in Europe. This astonishing revelation, coupled with his father's dark struggle with alcoholism, upends the world of a teenager struggling to become a man.

A touching memoir of life with an alcoholic father who secretly works with the CIA, a dark pilgrimage through the valley of depression and addiction, and finding a faith to redeem and a strength to forgive.

"This is a record of my life as I remember it—but more importantly, as I felt it."

At the age of sixteen, Ian Morgan Cron was told by his mother that his father, a motion picture executive, worked with the CIA in Europe. This astonishing revelation, coupled with his father's dark struggle with alcoholism, upended the world of a teenager struggling to become a man.

Born into a family of privilege and power, Ian's life is populated with colorful people and stories as his father takes the family on a wild roller-coaster ride through wealth and poverty and back again.

Decades later, as he faced his own personal demons, Ian realized that the only way to find peace was to voyage back through a painful childhood marked by extremes—privilege and poverty, violence and tenderness, truth and deceit—that he’d spent years trying to escape.

In this surprisingly funny and forgiving memoir, Ian reminds us that no matter how different the pieces may be, in the end we are all cut from the same cloth, stitched by faith into an exquisite quilt of grace.

Ian Morgan Cron is a bestselling author, nationally recognized speaker, Enneagram teacher, trained psychotherapist, Dove Award-winning songwriter and Episcopal priest. His books include the novel Chasing Francis and the spiritual memoir Jesus, My Father, the CIA, and Me. Ian draws on an array of disciplines—from psychology to the arts, Christian spirituality and theology—to help people enter more deeply into conversation with God and the mystery of their own lives. He and his wife, Anne, live in Nashville, Tennessee.

▼▲
"Ian is an absolutely magnificent writer, and this memoir is a stunning work. With Miles Davis and squirrels and weddings and Red Bull and fawns and cliff divingit's like he has this bottomless bucket of images and metaphors and they're all so spot-on brilliant. The prose is light and loose and free, and then there are these moments when there's just so much soul right on the page. I literally had to put the book down several times because I began tearing up. What a gift!" - Rob Bell, bestselling author of Love Wins and Velvet Elvis

"Ian Cron is a brilliant writer. This is the kind of book that you dont just read. It reads you." - Mark Batterson, bestselling author of In the Pit with a Lion on a Snowy Day

"Simply the best memoir I have read in years. It is engaging, clever, heartbreaking, and God-drenched in all the right ways." - Phyllis Tickle, The Great Emergence: How Christianity Is Changing and Why

"Just like Donald Miller's "Blue Like Jazz" Ian Morgan Cron has written a daring and moving memoir in which abounding joy and grace defeat despair and the disintegration of the human spirit. These confessional pages illuminate for all of us the path toward forgiveness." - Makoto Fujimura, artist, author and founder of International Arts Movement

▼▲
Ian Morgan Cron served for ten years as the Founding and Senior Pastor of Trinity Church in Greenwich, Conn., a non-denominational community committed to social justice as well as to communicating the Christian story through the arts. Now he is an Episcopal priest, speaker, retreat leader, and songwriter. Cron is also a doctoral student at Fordham University where he is focusing his studies on Christian spirituality and the work of Thomas Merton. In his spare time he enjoys hiking, traveling, and kayaking. He divides his time between homes in Tennessee and Connecticut with his wife and three children, and his Portuguese Water Dog, Hobbes.

▼▲
For good and ill, parents shape their children's lives in several ways. For decades, Episcopal priest Cron (Chasing Francis: A Pilgrim's Tale) bore the scars of having grown up with an emotionally distant alcoholic father. His story is heartbreaking and brutal, but simultaneously redemptive and consoling with bright moments of humor. An agent for the CIA, Cron's father was an enigma to his family and lacked the resources, financial and psychological, to take care of them. When he slides deeper into depression and alcoholism, Cron's heroic mother struggles to support the family, leaving Cron in the care of a warm and nurturing nanny. Their relationship is touching, but also serves to highlight the dysfunction in this family. Cron eventually succumbs to alcoholism, too, and spends years denying the problem until a trusted therapist challenges him to face it. The author finds the courage to release the repressed inner pain that he had been self-medicating through booze, and begins a slow healing process. While there are not many overtly religious passages, this story is chock-full of sacredness and hope. Cron is one of only a few contemporary spirituality authors who could articulate these themes as poignantly. (June 2) Copyright 2011 Reed Business Information.

▼▲
I'm the author/artist and I want to review Jesus, My Father, the CIA, and Me: A Memoir of Sorts.
Back
Back