Skip to main content
The Jerusalem Talmud: A Translation and Commentary on CD-Rom
Edited By: Jacob Neusner, Tzvee Zahavy
By: Edited by Jacob Neusner
Stock No: WW565287 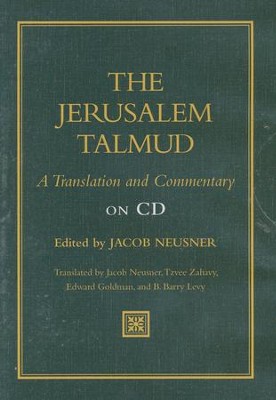 More Images
Buy Item Our Price$84.99 Retail: Save 53% ($94.96)
4 out of 5 stars for The Jerusalem Talmud: A Translation and Commentary on CD-Rom (4 Reviews)
In Stock
Quantity:
Ships free to the US
Stock No: WW565287
Hendrickson Publishers / Compact disc
Quantity:
Add To Cart
of These in Your Cart

The Jerusalem Talmud: A Translation and Commentary on CD-Rom

Edited By: Jacob Neusner, Tzvee Zahavy
By: Edited by Jacob Neusner
Hendrickson Publishers / Compact disc
4 out of 5 stars for The Jerusalem Talmud: A Translation and Commentary on CD-Rom (4 Reviews) Write a Review
In Stock
This product ships free to addresses in the US!
(Just select Standard shipping at checkout.)
Stock No: WW565287

▼▲
The Jerusalem Talmud, or Yerushalmi, or Talmud of the Land of Israel, is a commentary on the oral law (the Mishnah) of Israel that ties that oral law to the written law (the Torah, the Hebrew Scripture). Completed about 200 years prior to The Babylonian Talmud (Bavli), it records the first such compilation of Jewish scholarly thought.

Jacob Neusner completed this monumental American translation and commentary of The Jerusalem Talmud in the last decade, but until now it has been expensive and difficult to obtain. Now all thirty-nine Yerushalmi tractates, as translated by Neusner and Tzvee Zahavy have been brought together in this CD-ROM.

Enabling instantaneous searches by word or phrase, the CD-ROM edition has exceptional research capabilities-and opens swift avenues for exploration and discovery. It is essential electronic material for all who take the religous background of the Old and New estaments seriously.

The Jerusalem Talmud, or Yerushalmi, or Talmud of the Land of Israel, is a commentary on the oral law (the Mishnah) of Israel that ties that oral law to the written law (the Torah, the Hebrew Scripture). Completed about 200 years prior to The Babylonian Talmud (Bavli), it records the first such compilation of Jewish scholarly thought.

Jacob Neusner completed this monumental American translation and commentary of The Jerusalem Talmud in the last decade, but until now it has been expensive and difficult to obtain. Now all thirty-nine Yerushalmi tractates as translated by Professor Neusner and Tzvee Zahavy have been brought together in this CD-ROM. In addition to a preface and general introduction to the whole work, Professor Neusner has provided fresh and helpful introductions to each of the tractates. He has also provided within his translation the references to Bible verses alluded to in the Yerushalmi. This electronic edition contains the full content of the translation, commentary on most of the tractates, and introductions to each. Enabling instantaneous searches by word or phrase, it has exceptional research capabilities--and opens swift avenues for exploration and discovery.

▼▲
Jacob Neusner is Research Professor of Religion and Theology, Bard College, and Senior Fellow of the Institute of Advanced Theology at Bard College. He has published more than eight hundred books and innumerable articles, and he is editor of The Dictionary of Judaism in the Biblical Period and the three-volume Encyclopaedia of Judaism. He has also served as President of the American Academy of Religion, and was appointed as Member of the National Council on the Humanities and the National Council on the Arts.

"The CD-ROM's second importance is in making Neusner's groundbreaking work on this text available and readily accessible. His English translation of the Jerusalem Talmud originally was published between 1982 and 1994 by the University of Chicago Press, in thirty-five volumes (thirteen of the Yerushalmi's tractates were translated by scholars other than Neusner). That translation, excluding ten of the eleven tractates of the Division of Agriculture, served as the foundation for a second publication, Neusner's The Talmud of the Land of Israel: An Academic Commentary to the Second, Third and Fourth Divisions, published in 1998 by Scholars Press, in twenty-eight volumes. While the translation and commentary presented in this new CD-ROM edition thus have been available for a decade and more, the immense size of the work has meant that, despite its importance, until now it has been found almost exclusively in research libraries. This CD-ROM edition for the first time makes a complete English translation of the Talmud of the Land of Israel readily available to scholars and a general audience interested in Jewish history, law, and thought.

"Neusner's work has two components. The first, and for most readers central, component is the translation proper. Neusner (and the several other translators represented here) renders the exceedingly complex Hebrew and Aramaic of the Talmud in readable and comprehensible English. Bracketed comments supply the underlying stream of Talmudic thought that generally goes unstated within the Talmud's laconic style. Read without the bracketed additions, the translation is true to the Hebrew and Aramaic original. More important to most readers, when paying attention to the bracketed interpolations, even those unschooled in Talmudic rhetoric and rabbinic law can make sense of and appreciate the Talmudic discourse.

"The work's second component is the commentary, presented here as it appeared in the Scholars Press edition, but now including the eleven tractates of the Division of Agriculture absent from that publication. (In the original University of Chicago Press series, these tractates were translated by other scholars. For this edition Neusner has retranslated and commented on those tractates afresh.) "Rather than being concerned with the legal or theological ramifications of the Talmud's discussions, Neusner's commentary visually sets out and thereby clarifies the way in which the Talmud's redactors have gone about their work. Neusner wishes to understand how small units of discourse have been compiled into "compositions" that express a point or idea often quite unexpected based on the Mishnaic or other underlying text from which they evolve. He portrays the Talmudic redactor's work, first, by using different type styles to demarcate citations of antecedent documents (Mishnah and Tosefta) and to distinguish Aramaic from Hebrew. Second, he labels individual units of discourse so that the reader can be clear on how independent compositions have been juxtaposed to make larger points. Finally, he uses indentations to set out what, in contemporary usage, would appear in footnotes or appendices: discourse that advances the purpose of the Talmudic redactor even if it does not pertain to the specific exposition at hand. The result is a visual representation of the Talmud's redaction that, it bears noting, convincingly suggests this Talmud to be much more cogently edited than previous scholars have recognized.

The CD-ROM edition includes Neusner's brief introductions to the general topic and themes of each tractate, and it provides detailed outlines for most of the tractates (excepting the newly retranslated tractates in the Division of Agriculture). The program can be run from the CD or fully installed on both Windows and Macintosh computers. Composed of PDF files, it uses Adobe Reader as its presentation engine, so that all of the functionality of Adobe Reader is available. This includes basic searches and the ability to add and saves annotations. What is missing is the ability to view the original Talmudic text and to link that text to the translation (which can be done, for instance, in the Soncino Classics Edition of the Babylonian Talmud). But that feature will not be missed by the majority of individuals who in the first place turn to a translation such as this.

The Jerusalem Talmud: A Translation and Commentary on CD-ROM is a valuable addition to the corpus of rabbinic texts now available in electronic format. For the Babylonian Talmud, this includes Neusner's The Babylonian Talmud: A Translation and Commentary on CD-ROM, also published by Hendrickson, and the just mentioned Soncino Classics Edition. For the Jerusalem Talmud, Neusner's translation is the only option. But this is hardly an issue when the translation and commentary are as accurate, complete, and accessible as they are made to be here."
--Biblical Theology Bulletin

Q: Is the format in PDF? Is the format of the text in PDF Documents? If so, is it divided into parts or one large document?Thank You.

Yes, this is in PDF format. It is devided into a number of volumes and segments.

According to the publisher, this should work on Windows 7.

Q: is this cd mac compatible?

Yes, this is Mac compatible.

▼▲
I'm the author/artist and I want to review The Jerusalem Talmud: A Translation and Commentary on CD-Rom.
Back
Back