BRING CHRISTMAS HOME SALE: Save up to 85% through 11/2 >
Jerusalem: A Biblical and Historical Case for the Jewish Capital
By: Jay Sekulow 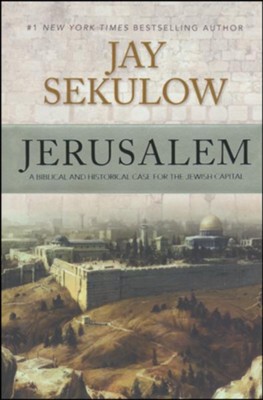 Jerusalem: A Biblical and Historical Case for the Jewish Capital

The State of Israel and its very right to exist is a lynchpin issue not only in the Middle-East, but is a critical issue to the world at large. Whether it is the blatant and stated desire of ISIS, Hamas, Hezbollah, or Iran to wipe Israel from the face of the earth, or the more subtle but equally insidious aim to delegitimize Israel's existence through efforts at UNESCO, the goal is the same—to get rid of Israel.

Here is the book that defends, once and for all, Israel's right to exist as a sovereign nation. As Chief Counsel for the American Center for Law and Justice, Jay Sekulow has fought with Israel hand-in-hand in some of Israel's most strategic, international battles. Now, he has pulled together the definitive and comprehensive look at Israel-one of the world's most controversial nations- and its importance to us as Americans and as a key focal point to the future of the world.

He looks at the legal case for its prominence, as well as the historical and political rationale for its existence as a sovereign nation and homeland for Jews today, and encourages readers to stand with him against the hatred, lies, and efforts to delegitimize one of the world's oldest nations.

▼▲
Jay Sekulow is widely regarded as one of the foremost free speech and religious liberties litigators in the United States, having argued twelve times before the U.S. Supreme Court in some of the most groundbreaking First Amendment cases of the past quarter century. As chief counsel of the American Center for Law and Justice (ACLJ), he is a renowned constitutional attorney, and an international expert on religious liberty. As well, he is an acclaimed and distinguished broadcaster.

Jay is a passionate advocate for protecting religious and constitutional freedoms with an impressive track record of success. His steadfast determination and commitment to protecting these freedoms is expansive with his work resulting in a lasting impact across America and around the world. He is a member of President Donald Trump's legal team, and he is also a popular talk radio host who regularly appears on major media, including Fox News, CNN, ABC, NBC, CBS, and other outlets.

▼▲
Jay Sekulow's alarming and inspiring Undemocratic is a must-read for anyone who wants to restore American greatness.
—Sean Hannity on Undemocratic

▼▲
I'm the author/artist and I want to review Jerusalem: A Biblical and Historical Case for the Jewish Capital.
Back
×
Back
×