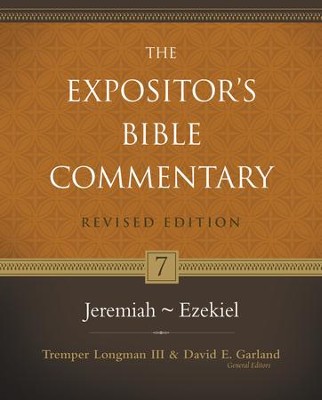 ▼▲
Continuing a Gold Medallion Award-winning legacy, this completely revised edition of The Expositor's Bible Commentary series puts worlrd-class biblical scholarship in your hands. Based on the original twelve-volume set that has become a staple in college and seminary libraries and pastors' studies worldwide, this new thirteen volume edition marshals the most current evangelical scholarship and resources. Of the fifty-six contributors, thirty of them are new to the series. Reflecting the commentary's international and cross-denominational approach, they come from the United States, Canada, England, Scotland, Australia, and New Zealand, and from a diversity of churches, including, Anglican, Baptist, Bretheren, Methodist, Nazarene, Presbyterian, and Reformed.

Dr. Michael L. Brown holds a Ph.D. in Near Eastern Languages and Literatures from New York University and has served as a visiting or adjunct professor at seven top seminaries. The author of more than twenty-five books, Brown also leads a ministry school that specializes in world missions and has preached and taught across America and around the world. He hosts the Line of Fire radio program, two hours daily and syndicated on several networks, including Salem, Truth, and AFR, as well as an apologetics TV program that airs on NRBTV. Michael has appeared often on secular and Christian media (including Piers Morgan, Tyra Banks, Phil Donahue, 700 Club, and Daystar) and has conducted debates or outreach lectures on major campuses, including Oxford University, the Hebrew University (Jerusalem), Ohio State University, Yale, and USC. Michael and his wife, Nancy, have two children and four grandchildren. They live near Charlotte, NC.

▼▲
I'm the author/artist and I want to review Jeremiah-Ezekiel, Revised: The Expositor's Bible Commentary.
Back
Back