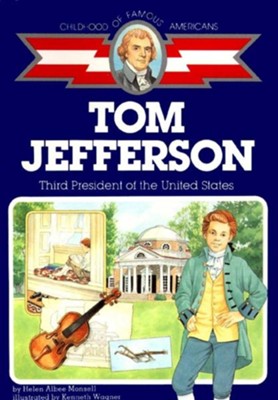 ▼▲
Thomas Jefferson’s legacy as founding father and author of the Declaration of Independence makes him an unforgettable all-star in American history. But what was he like as a child?

In this narrative biography, you’ll learn all about the childhood of Thomas Jefferson—from his birth on April 13, 1743, in Shadwell, Virginia (the third of ten children), to his study of languages from an early age, to his love of horseback riding and nature.

Find out what Jefferson did for fun—and how his childhood and education led him to write the Declaration of Independence and lead a new nation as the third president of the United States.

▼▲
Helen Albee Monsell is the author of biographies about Thomas Jefferson, Susan B. Anthony, and Robert E. Lee.

▼▲
I'm the author/artist and I want to review Tom Jefferson: Third President of the United States.
Back