Skip to main content
CYBER WEEK SALE! Spot great deals up to 88% off. >
Jamie O'Rourke and the Big Potato
By: Tomie DePaola
Stock No: WW8116030 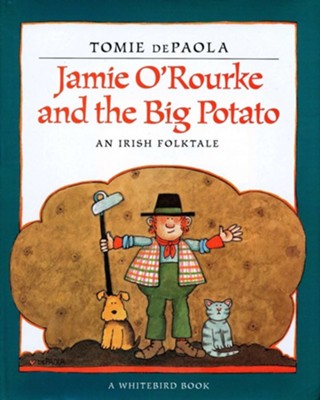 Jamie O'Rourke and the Big Potato

Jamie O'Rourke is the laziest man in all of Ireland, far too lazy to help his wife on their farm. Then, after a chance encounter with a leprechaun, Jamie finds himself growing the biggest potato in the world. But what will happen when the potato grows too large for Jamie and the villagers to handle?

▼▲
Tomie dePaola was born in Meriden, Connecticut, in 1934, to a family of Irish and Italian background. His determination to create books for children led to a BFA from Pratt Institute in Brooklyn, New York, and an MFA from the California College of Arts & Crafts in Oakland, California. His particular way with color, line, detail, and design have earned him many of the most prestigious awards in his field, among them a Caldecott Honor Award for Strega Nona, the Smithsonian Medal, the Kerlan Award from the University of Minnesota for his "singular attainment in children's literature," the Catholic Library Association's Regina Medal for his "continued distinguished contribution," and the University of Southern Mississippi Medallion. He was also the 1990 United States nominee for the Hans Christian Andersen Medal for illustration, and received the Children's Literature Legacy Award for lifetime contribution to children's literature in 2011.
DePaola has published almost 200 children's books in 15 different countries over the past 30 years. Among his most well-known titles are the Strega Nona series, 26 Fairmount Avenue, and The Legend of the Indian Paintbrush.
DePaola lives in an interesting house in New Hampshire with his four dogs. His studio is in a large renovated 200-year-old barn.

▼▲
Praise for Jamie O'Rourke and the Big Potato:

"This inspired Irish folktale clearly illustrates that taking the easy way out is sometimes more trouble than it's worth . . . DePaola' s characteristic homespun style and round, childlike faces add plenty of zip to this silly story." --&shy;Publishers Weekly

"A cheery picture book, with the artist using the lighter, brighter side of his palette . . . Attractive and amusing." --Kirkus Reviews

▼▲
I'm the author/artist and I want to review Jamie O'Rourke and the Big Potato.
Back