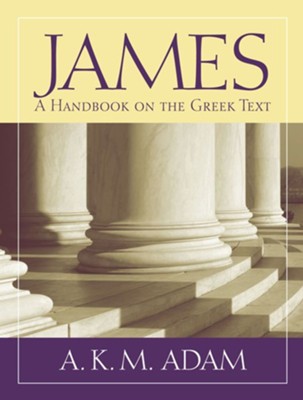 James: A Handbook on the Greek Text [BHGNT]

▼▲
This volume in the popular Baylor Handbooks on the Greek New Testament series provides students with a comprehensive guide through the Greek text of the Epistle of James. Here A.K.M. Adam explains the text's critical, lexical, grammatical, and linguistic aspects while revealing its carefully crafted narrative style. In all, they show the author of Luke to be a master communicator, well at home within the Greek biographical tradition.

About the BHGNT Series
The Baylor Handbook on the Greek New Testament [BHGNT] is designed to guide new readers and seasoned scholars alike through the intricacies of the Greek text. Each handbook provides a verse-by-verse treatment of the biblical text. Unlike traditional commentaries, however, the BHGNT makes little attempt to expound on the theological meaning or significance of the text under consideration. Instead the handbooks serve as "prequals" to commentary proper.

Finally, while the BHGNT series does not consider modern linguistic theory to be the ultimate authority in all matters of exegesis, it does aim both to help move linguistic insights into the mainstream of NT reference works and, at the same time, help weed out remaining myths in popular and academic literature about the language.

In this addition to the Baylor Handbook on the Greek New Testament series, A. K. M. Adam provides a guide through the Greek text of the Epistle of James. This handbook highlights the linguistic, rhetorical, and stylistic features of James, utilizing the Greek text to lead discussion on many of the theological questions raised by the letter. Adam expertly unveils the letter's excellent use of Hellenistic Greek balanced with noticeable Jewish patterns of thought. Students and teachers will find James a helpful tool in navigating this centuries-old piece of New Testament literature.

A. K. M. Adam is Senior Tutor and Tutor in New Testament, St. Stephen's House, at the University of Oxford.

Adam’s handbook is highly recommended as a useful tool in exploring and digging deeply into the riches and nuances of the Greek text of the Epistle of James.

This will prove to be a useful book for students working on their exegesis of passages in James as well as pastors or teachers who want to take the original language of the text of James seriously. Many commentaries do not get as specific as Adam does in explaining most of the salient features of the Greek language that James uses. But more than merely giving grammatical labels, he unpacks for readers what those categories mean for the interpretation of James’ epistle in the contexts of the letter itself.

▼▲
I'm the author/artist and I want to review James: A Handbook on the Greek Text [BHGNT].
Back
×
Back
×