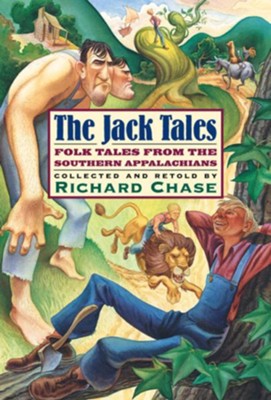 ▼▲
A collection of folk tales from the southern Appalachians that center on a single character, the irrepressible Jack.

▼▲
Richard Chase collected The Jack Tales in the mountain country of North Carolina, where they have been handed down for generations. Everyone knows the story of Jack and the Beanstalk. This book contains eighteen stories about Jack, many of them still completely new to the average reader. And what adventures Jack has! Noted American folklorist Richard Chase (1904–1988) has been called the man “most responsible for the renaissance of Appalachian storytelling.” A collector of tales that had been handed down from generation to generation in the Appalachian regions of the United States, Chase was born in Alabama and lived in the mountains of North Carolina.

▼▲
Grandparents can be great storytellers, too, and the aptly titled Grandfather Tales: American-English Folk Tales, edited by Richard Chase, illus. by Berkeley Williams Jr. (first published in 1948), collects folk stories and tall tales handed down for generations. Although many originated in England, they have taken on a distinct American flavor. Familiar backcountry characters include Sody Sallyraytus and Old Dry Frye. The Jack Tales: Folk Tales from the Southern Appalachians (1943), also edited by Chase, illus. by Williams, captures 18 folk tales about Jack, well known to children from Jack and the Beanstalk (here known as "Jack and the Bean Tree"). Williams's occasional pen-and-ink drawings add to the handsome package. Copyright 2003 Reed Business Information.

▼▲
"Humor, freshness, colorful American background, and the use of one character as a central figure in the cycle mark these eighteen folktales, told here in the dialect of the mountain country of North Carolina." Booklist, ALA

▼▲
I'm the author/artist and I want to review Jack Tales.
Back
×