It Was at Hand
By: Michael E. Riemer 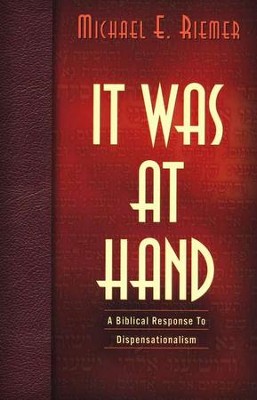 It Was at Hand

▼▲
In this provocative new book, Michael Riemer uncovers the contradictions of dispensational "end times" theology. Riemer argues that the false emphases the Dispensationalists have placed on the "imminent second coming" and the "Rapture" have led many Christians to a life of finding new ways to spread the Gospel and to bring a blessing to the world, Dispensationalists have inclined Christians toward a bunker mentality - live separate and wait to be spirited away. In plain and engaging language Riemer traces many of the excesses of the Dispensationalists, including their wildly contradictory dating of the end of the world and their wrenching of the context of many prophecies in Scripture. He gives a clear exposition of Daniel's Seventy Weeks. He also provides an insightful discussion of Jesus' Olivet Discourse, in which he argues convincingly that the original listeners and the first-century church would have understood Jesus' words of warning in the context of the destruction of Jerusalem by the Romans in 70 AD, not some Tribulation to occur two thousand years later.