Skip to main content
Island of the Blue Dolphins
By: Scott O'Dell
Stock No: WW328614 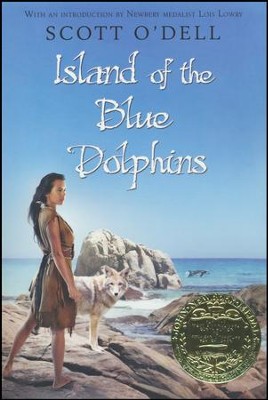 Island of the Blue Dolphins

▼▲
Far off the coast of California looms a harsh rock known as the island of San Nicholas. Dolphins flash in the blue waters around it, sea otter play in the vast kep beds, and sea elephants loll on the stony beaches. Here, in the early 1800s, according to history, an Indian girl spent eighteen years alone, and this beautifully written novel is her story. It is a romantic adventure filled with drama and heartache, for not only was mere subsistence on so desolate a spot a near miracle, but Karana had to contend with the ferocious pack of wild dogs that had killed her younger brother, constantly guard against the Aleutian sea otter hunters, and maintain a precarious food supply.

▼▲
Scott O’Dell's Newbery Medal-winning classic is a gripping tale of survival, strength, and courage. Based on the true story of a Nicole&ntilde;o Indian girl living alone on an island off the coast of California, Island of the Blue Dolphins has captivated readers for generations.

On San Nicolas Island, dolphins flash in the surrounding blue waters, sea otter play in the vast kelp beds, and sea elephants loll on the stony beaches. Here, in the early 1800s, a girl named Karana spent eighteen years alone. Karana had to contend with the ferocious pack of wild dogs that killed her younger brother, constantly guard against Aleutian sea otter hunters, and maintain a precarious food supply. Her courage, self-reliance, and grit has inspired millions of readers in this breathtaking adventure.

▼▲
Scott O’Dell (1898–1989), one of the most respected authors of historical fiction, received the Newbery Medal, three Newbery Honor Medals, and the Hans Christian Andersen Author Medal. Some of his many books include The Island of the Blue Dolphins; Black Star, Bright dawn; and The Black Pearl.

▼▲
"A haunting and unusual story based on the fact that in the early 1800s an Indian girl spent eighteen years alone on a rocky island far off the coast of California . . . A quiet acceptance of fate characterizes her ordeal." School Library Journal, Starred

"O'Dell tells the miraculous story of how Karana forages on land and in the ocean, clothes herself (in a green-cormorant skirt and an otter cape on special occasions), and secures shelter. Perhaps even more startlingly, she finds strength and serenity living alone on the island. This beautiful edition of Island of the Blue Dolphins is enriched with 12 full-page watercolor paintings by Ted Lewin, illustrator of more than 100 children's books, including Ali, Child of the Desert. A gripping story of battling wild dogs and sea elephants, this simply told, suspenseful tale of survival is also an uplifting adventure of the spirit." Amazon.com

▼▲
I'm the author/artist and I want to review Island of the Blue Dolphins.
Back
Back