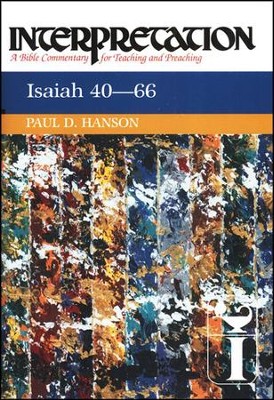 Isaiah 40-66: Interpretation: A Bible Commentary for Teaching and Preaching (Hardcover)

▼▲
(PUBWestminster/John Knox)The Professor of Old Testament at Harvard Divinity School delves into Second Isaiah's beautiful poetic argument for a loving and caring God and how his creatures fit into the unfolding of history and the Messianic last days. 272 pages, hardcover.

▼▲
The latter half of the sixth century BCE found the Jewish community fragmented and under great strife after having been conquered by the Babylonian armies. As a response to a growing despair over life in servitude and exile, Isaiah 40-66 was written. Paul Hanson examines the writings of Second and Third Isaiah. What he discovers is a poetic argument for a loving and attentive God and the rightful place of God's creatures in the unfolding of history.

▼▲
Paul D. Hanson is Florence Corliss Lamont Research Professor of Divinity at Harvard Divinity School in Cambridge, Massachusetts, where he has taught since 1971.

▼▲
I'm the author/artist and I want to review Isaiah 40-66: Interpretation: A Bible Commentary for Teaching and Preaching (Hardcover).
Back
×
Back
×