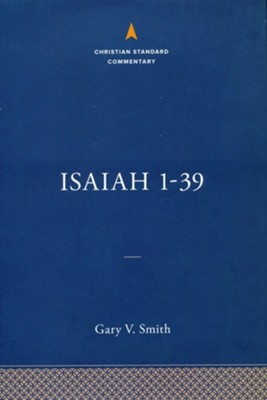 Balancing theological and exegetical concerns, solid scholarship, and practical application, Gary V. Smith parses Isaiah 1-39 for The Christian Standard Commentary series. In this second edition, he integrates the CSB translation into his interpretation and expounds on the book's Assyrian background, which places it in direct conflict with Yahweh's universal kingship, leading to Hezekiah's challenge to trust in God alone.

This series helps the reader understand each biblical book's theology, its place in the broader narrative of Scripture, and its importance for the church today. Drawing on the wisdom and skills of dozens of evangelical authors, the CSC is a tool for enhancing and supporting the life of the church.

The author of Isaiah 1-39: The Christian Standard Commentary is Gary Smith.

▼▲
I'm the author/artist and I want to review Isaiah 1-39: The Christian Standard Commentary.
Back