Skip to main content
Is Christianity Good for the World?
By: Christopher Hitchens, Douglas Wilson
Stock No: WW280538 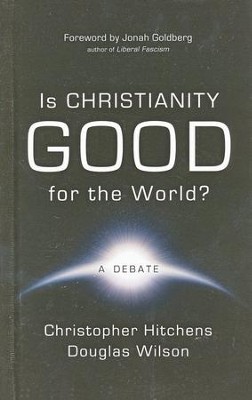 Is Christianity Good for the World?

▼▲
The gloves come off in this electric exchange, originally hosted by Christianity Today, as leading atheist Christopher Hitchens (author of God Is Not Great) and Christian apologist Douglas Wilson (author of Letter from a Christian Citizen) go head-to-head on this divisive question. The result is entertaining and provocative-a glimpse into the ongoing debate.

▼▲
Put two contrarians together and shake well. -Christianity Today The gloves come off in this electric exchange, originally hosted by Christianity Today, as leading atheist Christopher Hitchens (author of God Is Not Great) and Christian apologist Douglas Wilson (author of Letter from a Christian Citizen) go head-to-head on this divisive question. The result is entertaining and provocative-a glimpse into the ongoing debate.

If God exists, is he a god of love or a supreme and absolute and unalterable ruler, whose reign was eternal and unchallengeable, who required incessant propitiation, and who keeps us all under continual surveillance, waking and sleeping, which did not even cease (and which indeed even intensified) after our deaths? (p. 8)

If there is no God, how does morality arise?

Christopher Hitchens and Douglas Wilson debate these and other questions in Is Christianity Good for the World? This debate first appeared in Christianity Today. Christopher Hitchens is a respected columnist, author, journalist, and visiting professor who holds an anti-theist position. In other words, he is someone who is delighted that there is absolutely no persuasive evidence for the existence of any of mankinds many thousands of past and present deities. (p. 8)

Pastor, author, and educator Douglas Wilson sees the issue of atheism as a lack of gratitude to God and an unwillingness to glorify Him, based on Romans 1:21. He points out that, if we are just evolved proteins, morality has no basis, and ethics has no foundation and no authority.

Hitchens bases his arguments on the fact that peoples before Christ had morals and that (e)very Christian church has had to make some apology for its role in the Crusades, slavery, anti-Semitism, and much else. (p. 17) He believes that ethics derive from innate human solidarity and not from the supernatural. (p. 29) However, what his objection to God seems to boil down to is declining to believe that another human being can tell me what to do, in the most intimate details of my life and mind, and to further dictate these terms as if acting as proxy for a supernatural entity. (p. 18)

In the course of the debate the authors get caught up discussing the Prodigal Son. Wilson does a good job explaining how knowing the ethnic tension behind the story adds to the moral teaching of the story. However, the whole discussion tends to obscure the topic of the debate. Wilson repeatedly tries to draw Hitchens to answer the question of the authority that atheists have to assert that anything is moral or immoral, given their belief in evolution. Hitchens asserts that innate human solidarity provides the only source needed. Considering the increase of slavery in our world, genocide, the imprisonment of women in some Muslim countries for getting raped, rampant child pornography and prostitution, the solidarity doesnt seem too innate in many of us. Wilson points this out.

Hitchens appears a skilled debater. One can enjoy his rhetorical abilities and maneuvering skills, but he deals in sweeping generalities at times, with some of those generalities being inaccurate, such as his assertion that Jesuslike almost every other prophet on recordwas (his sense here is more, claims to be) born of a virgin. (p. 16). Im not sure what other prophets claimed virgin birth. I dont believe either Mohammad or Confucius did and I know of no other biblical prophet who did. Some of these assertions weaken his arguments.

He does make some good points, such as the failure of the Church to stand for what is right at times through history. Unfortunately he hits the nail on the head with some leaders in the church who cite the concept of vicarious redemption, whereby ones own responsibilities can be flung onto a scapegoat and thereby taken away. (p. 16)

Wilson repeatedly tries to pin Hitchens down on whether or not atheism provides any rational basis for rational condemnation when others decide to misbehave this way. (p. 33) Hitchens argues early on that if Christians would claim the good things done in the name of Christianity, such as charities, it must also accept the evil things done in its name. However, he does not apply this same standard to atheists. In fact, the church even gets the blame for the atheist Stalin. With millions of hungry and anxious people so long stultified and so credulous, Stalin the ex-seminarian would have been a fool if he did not call upon such a reservoir of ignorance and servility, and seek to emulate his predecessor, the Czar who was the head of a corrupt and bigoted Orthodox Church. (p. 31) So much for innate human solidarity.

Although the book was not what I expected, it provides interesting reading, especially once you get through the first chapter. Both men maintain a respectful civility toward one another and the reader, which allows the reader to attend to the discussion rather than emotion. For Christians, Hitchens gives us a peek into atheistic thinking, and Wilson gives some good responses. At times the debate maneuvering of Hitchens make you want to cry out, Just give him a straight answer. Debate techniques are not always enlightening on the issue.

Readers should not expect much on the actual question of whether Christianity is good for the world, but studying the thinking of both sides is profitable and enlightening. Debbie Wilson, www.ChristianBookPreviews.com

▼▲
I'm the author/artist and I want to review Is Christianity Good for the World?.
Back